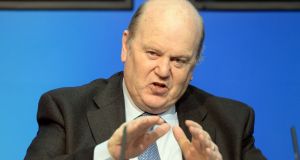 Minister for Finance Michael Noonan: said he believed eliminating VAT on condoms would not have a significant impact on sexual behaviour. Photograph: Eric Luke

Minister for Finance Michael Noonan has said scrapping the 13.5 per cent VAT on condoms would not lower the rate of sexually transmitted infections (STIs).

At the Oireachtas Committee on Budgetary Oversight, Mr Noonan was asked about Government plans for a lower VAT rate for the hospital sector and specifically whether VAT on condom sales should abolished altogether.

However, he said he believed eliminating VAT on condoms would not have a significant impact on sexual behaviour.

Depending on the variety, many boxes of 12 condoms cost up to €20, which health groups claim is too costly for young people.

In 2008, the then Fianna Fáil government reduced VAT on condoms from 21 per cent, one of the highest in Europe, to 13.5 per cent.

The move also followed petitions from various health bodies, including the Crisis Pregnancy Agency, which cited studies showing a significant portion of young people felt the cost of condoms discouraged them from using them.