Minister for Health appoints senior officials to examine the case 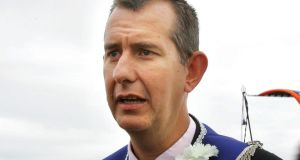 Northern Ireland’s Minister for Health Edwin Poots has appointed senior officials to examine the case of a woman who travelled to England for an abortion because she was carrying a baby with anencephaly.

The woman, who was 20 weeks pregnant, said it was discovered last week following a hospital scan and other tests that the baby had a fatal foetal abnormality and had no chance of survival.

A scan last Thursday detected there was a problem and further tests in the Ulster Hospital in east Belfast confirmed the foetus had anencephaly.

“We were told we were carrying a baby with anencephaly. It’s the worst case of spina bifida so the baby has no skull formed and it’s brain dead. It’s very hard to come to terms with,” the woman told BBC Radio Ulster’s Stephen Nolan programme this morning.

“I was told the only way I could have an abortion was if there was a threat to my life - after 12 weeks the baby has its own rights,” she added.

“If I was to carry on with the pregnancy in Northern Ireland, they scan you every two weeks until they find the baby has passed away then they bring you in to start labour,” she said.

The woman, who is known as Sarah, called for changes to legislation to allow for abortion in the North in cases such as hers. “Before this happened to me, I didn’t agree with abortion but this is medical - this is a dead body I’m being forced to carry in Northern Ireland because of this silly law.”

Mr Poots said today that he has appointed senior officials to consider the particular case.

“I want to be 100 per cent assured that everything has been done that we would expect to be done, within the confines of the legal position that exists in Northern Ireland,” he said.

The Minister said the law on abortion in Northern Ireland and any potential change to it was a matter for the Department of Justice, the Northern Executive and the Assembly. His remit was to ensure there were quality services available, within that law.

The 1967 British Abortion Act does not apply in the North. The Department of Health currently is considering updating guidelines on when abortion is permitted in Northern Ireland.

Under existing guidelines abortion in Northern Ireland is legal where “it is necessary to preserve the life of the woman or there is a risk of real and serious adverse effect on her physical or mental health, which is either long term or permanent”.

“In any other circumstances it would be unlawful to perform such an operation,” the guidelines add.