NI nationalism could face isolation in event of ‘Brexit’ 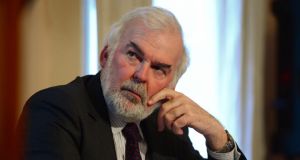 One possible implication of a British EU exit could be the isolationism of nationalism in the North, the director general of the International and European Affairs (IIEA), Tom Arnold, has said.

Mr Arnold was speaking in Queen’s University Belfast at the launch of “Britain and Europe: The Endgame - An Irish Perspective”, which was edited by Irish Times columnist Paul Gillespie and the former Irish ambassador to London Dáithí O’Ceallaigh.

The book, which is published by the IIEA, examines possible future relationships between the United Kingdom and the European Union and their implications for Ireland and posits four possible outcomes to the future British referendum on the European Union.

Mr Arnold, who is also one of the 10 contributors to the book, said that how the UK votes in the “in-out” referendum is a matter of “high politics” which means it matters a “great deal”,

One possible implication of “Brexit” could be the isolationism of nationalism in the North, he said. An exit also could have consequences for relations between the North and South and between the two islands where “important elements of commonality” could be lost.

Mr Arnold referred to a risk assessment examination of Britain leaving the EU carried out for the Government which highlighted concerns over the stability of the North. He cited the assessment from that opinion that “this matters because the fragile peace needs constant attention”.

He said, as with the rest of these islands, it is important for Northern Ireland to thoroughly debate the issues around the referendum.

Mr O’Ceallaigh said that how the UK votes whenever British prime minister David Cameron calls the referendum “will have enormous consequences between the North and the South and between the rest of the UK”.

Mr Gillespie said there must be consideration as to whether a British exit from the European Union would place the issue of Irish unity higher up the agenda than would be possibly “expected” or “desired”.

He said the British referendum could have implications for Belfast and Dublin as well as London, Edinburgh and Cardiff. “Irish unity could become higher on the agenda in a way, possibly, that is neither expected nor desired. And that could happen more rapidly than people think or expect.”

Mr Gillespie, a former foreign editor of The Irish Times said that “Brexit” could also raise the possibility of Scotland seeking to remain in Europe while England and Wales stayed out.

“This could become destabilising for the UK,” said Mr Gillespie. “It could put the question of Scottish independence back on the agenda.”

Mr Gillespie also referred to how during the recent Westminster election campaign Sinn Fein president Gerry Adams called for a “dedicated” Northern Ireland plebiscite where the North also could vote to remain in the EU even if all or most of the UK voted for quitting.

Mr Gillespie said the British referendum could have implications for Belfast and Dublin as well as London, Edinburgh and Cardiff. “Irish unity could become higher on the agenda in a way, possibly, that is neither expected nor desired. And that could happen more rapidly than people think or expect.”

Economics professor, John Bradley, another contributor to the book, said “it would be tragic if the process of mutual strengthening of the two island economies through North-South trade and economic cooperation were to be disrupted by British exit”.