Newgrange to be X-rayed to determine source of granite 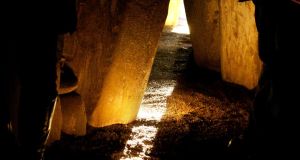 The sun shines along the passage floor into the inner chamber at Newgrange during the winter solstice. Photograph: Alan Betson/The Irish Times

The base of the 5,000- year-old Neolithic monument at Newgrange, Co Meath, is to be X-rayed by a researcher in a bid to determine the origin of its granite boulders.

Dr Ian G Meighan of the Geological Survey of Northern Ireland, who holds an honorary research position in Trinity College Dublin, is determining whether the boulders come from Newry or Mourne.

Newgrange, Co. Meath by The Discovery Programme on Sketchfab

He said work would get under way before the end of the year, using technology formerly used at Tara mines and now in the possession of Trinity College. Speaking at the launch of First Light: the Origins of Newgrange by Office of Public Works archaeologist Dr Robert Hensey, Dr Meighan said the X-rays would detect and quantify trace metals and identify the source of the granite. Newry and Mourne granite were “like chalk and cheese”, he said.

Launching the book, Minister of State with responsibility for the OPW Simon Harris said Newgrange was built by people who lived in small vernacular houses. They had constructed what was the biggest building in the world, until that status was later taken over by the pyramids of Egypt.

First Light: the Origins of Newgrange is published as part of the “Insights in Archaeology” series, by Oxbow Books, Oxford.