New search for one of IRA ‘Disappeared’ in Co Meath bog 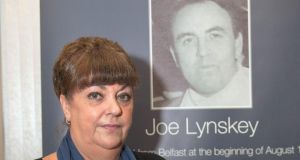 A photograph of Maria Lynskey who is the niece of Joe Lynskey, one of the IRA’s “Disappeared” victims. A search for his remains has started in Co Meath. Photograph: Kevin Cooper Photoline/PA Wire.

Preliminary investigations to find another of the ‘Disappeared’, Joe Lynskey, have started in Co Meath now that the remains of Brendan Megraw have been recovered, the Independent Commission for the Location of Victims Remains (ICLVR) saidtoday.

Mr Lynskey, one of 17 people killed and then secretly buried or otherwise disposed of by republican paramilitaries, went missing in 1972 when he was in his 40s. It was only four years ago that the IRA admitted that he too was one of the disappeared.

A former Cistercian monk and subsequent IRA member, he was abducted and killed because the IRA judged he was seriously compromised by an alleged relationship with the wife of an IRA man.

Frank Murray, representing the Government and who with Sir Kenneth Bloomfield is joint head of the ICLVR, said in Belfast that it was thought that the IRA buried Mr Lynskey in Co Meath somewhere close to the general Oristown bog area where the remains of Mr Megraw were found last month.

“The commission is now starting preliminary work, at a very early stage I must emphasise, in relation to Joe Lynskey,” said Mr Murray.

Mr Murray and Sir Kenneth were at the Wave trauma centre in north Belfast yesterday where he joined several relatives of the Disappeared including Kieran Megraw, brother of Brendan Megraw.

Mr Megraw said that Brendan’s body should be returned for a wake in west Belfast next Wednesday after DNA tests were carried out in Dublin establishing that the body was that of his brother. His funeral Mass will take place at 11.30 am next Friday at St Oliver Plunkett’s Church at Glenveagh Drive in Lenadoon.

“It might seem strange but we are looking forward to getting him back from Dublin, bringing him to Belfast, to have a wake, and finally to bury him with his Mum and Dad - we have a sense of joy and relief,” he said.

Aged 23 and newly married, and with his wife expecting their first child, a daughter, he was abducted by the IRA from his west Belfast home in April 1978. In killing him the IRA said was an agent provocateur.

Mr Megraw was 18 doing his A-levels when his brother disappeared. He said Brendan was a man “who was into motor-bikes, loved music by bands such as Cream and Procul Harum, who just wanted to have a good time and was very particular about his appearance”.

In a short simple ceremony at the Wave centre Mr Megraw withdrew a white lily from a dark wreath leaving six lilies representing the six of the Disappeared who are still missing: Mr Lynskey; Capt Robert Nairac shot dead in 1977; Columba McVeigh who was murdered in 1975 and is believed to be buried in Co Monaghan; Kevin McKee and Seamus Wright who disappeared in1972 and are believed buried in a bog at Coghalstown, near Wilkinstown in Co Meath; and Seamus Ruddy who was killed in France by the INLA in 1985 during an internal feud and is believed to be buried in a forest near Rouen.

Kieran Megraw thanked the person who provided the final piece of information that helped the commission locate his brother’s body, and appealed for anyone with information about the others of the Disappeared to bring it forward to the commission. Under legislation this can be done without fear of those giving the information being prosecuted.

Anne Morgan, brother of Mr Ruddy, made the same appeal. She was sure that he was buried near Rouen. Searches were carried out in 2008 but the body was not found. She appealed for more specific information from the INLA.

“Somebody has to know where he is buried,” she said. “We hope that the INLA will go to their members and ask the difficult questions again, about what happened on the night that Seamus was brought to the forest outside Rouen and murdered.”