Philadelphia Rose Maria Walsh was last night crowned as the 2014 Rose of Tralee. A native of Boston, Massachusetts, Ms Walsh moved to the south Mayo village of Shrule in 1994. Video: Ronan McGreevy 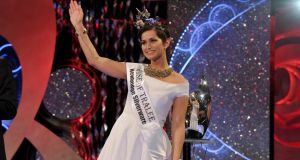 Philadelphia Rose Maria Walsh has spoken of her confidence as a gay woman : Domnick Walsh/Eye Focus

The new Rose of Tralee Maria Walsh has spoken of her confidence as a gay woman and said the question of her sexuality never arose during the festival.

Ms Walsh (27), the Philadelphia Rose, who became the 56th Rose of Tralee on Tuesday night said being gay was normal.

“I’m not ashamed of my sexuality by any means. The Rose of Tralee is about celebrating women’s intelligence, careers, their volunteer work. The question of sexuality just never came up.

“Being gay and in a gay relationship is just one of the many things I identify and associate with. I’m confident in who I am as a person. I told my parents and they were supportive, as I knew they would be.

“If this can help any person to feel more comfortable with who they are, I’m happy,” she told The Sun on Sunday newspaper.

Ms Walsh was the overwhelming favourite to win the Rose of Tralee with the bookies though she admitted being “absolutely shocked” to have been chosen among the 32 girls in the competition.

A festival spokesman confirmed that the issue of Ms Walsh’s sexuality never came up at any stage of the judging process.

When asked immediately after the festival if she was single, she responded: “I am indeed. My father has very high ambitions for whoever is stepping in so if they can pass the mother and father test then I might give them an auld gander.”

Rose of Tralee executive international chairman Anthony O’Gara said the festival was “delighted” to have chosen Ms Walsh as this year’s Rose.

“She is a wonderful person, an attractive, intelligent woman and a very worthy winner who happens to be gay,” he added.

“Her sexuality will no doubt create some interest, hopefully all positive. She wants to be celebrated as Maria Walsh in the complete sense of her person and hopefully everybody will respect that.”

Former Rose of Tralee Aoibhinn Ní Shúilleabháin tweeted: “Our new @RoseofTralee_ Maria Walsh is a wonderful representative for both the festival and young women everywhere.”

Ms Walsh was born in Boston, but grew up in Shrule, Co Mayo. She emigrated to New York three years ago to work in the fashion industry and moved to Philadelphia where she now works as a fashion brand manager for Anthropologie.

During her interview on the stage in the Dome, she spoke about the three tattooes behind her right ear in honour of her cousin Teresa Molloy who died in a car crash in 2009.

She also spoke of being a pioneer having taken the pledge at her Confirmation when she was 12.