New IRA the deadliest of the dissident republican groupings

Analysis: PSNI, Garda and MI5 in battle to prevent attacks during 1916 centenary period 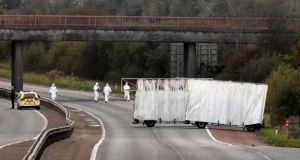 Forensic officers search the scene on the M1 motorway where prison officer David Black was shot as he drove near the town of Lurgan, Northern Ireland on November 1st, 2012. Photograph: Reuters

The group calling itself “the IRA”, which also goes under the name of the New IRA and which claimed responsibility for the attempted murder of a Belfast prison officer, is the most dangerous of the different dissident groupings.

As portrayed by senior security sources, it is now engaged in a deadly duel with the PSNI, Garda and British and Irish intelligence services during this Easter 1916 centenary period.

And as stated by PSNI assistant chief constable Stephen Martin its aim in the coming weeks is to kill police officers, British soldiers and/or prison wardens.

“It has definitely ramped up its level of activity,” said a senior security source on Monday.

In turn, the PSNI, Garda and MI5, which has the lead role in gathering intelligence on the dissidents in Northern Ireland, have intensified their efforts to thwart them.

The New IRA is an amalgamation of the Real IRA, Republican Action Against Drugs and a loose collection of “blooded” dissident republicans.

The different groupings came together in 2012 under the banner of “the IRA”.

It was responsible in November that year for the murder of prison officer David Black.

Prior to the formation of the new organisation some of its members were believed to have been involved in the 2011 murder of PSNI constable Ronan Kerr and two years earlier in the murders of British soldiers, Patrick Azimkar and Mark Quinsey.

It has been involved in numerous other attempted murders and bombings.

Previously the group going under the name of Oglaigh na hEireann was viewed as posing a significant threat but, according to security sources, its effectiveness was undermined by the arrest last year in the Republic of its main leader or purported chief-of-staff.

And while the Continuity IRA said it murdered David Byrne in the Regency Hotel shooting last month - a claim treated with considerable scepticism by security people on both sides of the Border - it is generally viewed as weakened and heavily infiltrated.

The New IRA’s leaders include a former senior member of the Provisional IRA’s east Tyrone brigade aged in his early 40s and a senior Derry republican also in his 40s.

It has a strong presence in Belfast and Derry, and also operates in areas such as Tyrone, mid-Ulster and Fermanagh. It has a strong core of members who can carry out gun and bomb attacks and many more who are prepared to offer more peripheral support.

Security sources were not surprised by its claim that it used Semtex in the bomb attack which injured the 52-year-old prison officer on Friday.

They believe it has a hoard of Semtex which was “probably siphoned off from old IRA stock”. They questioned whether the group could have imported new stockpiles of Semtex into Ireland, as has been claimed.

There is great concern about their engineering expertise, some of it carried on from the Provisional IRA, and their capability to carry out major bomb attacks.

There also is a worry that they will develop more sophisticated and lethal rockets. “Their projectiles have failed to far but there is a concern they will develop the necessary engineering capacity to breach armour,” said one source.

The security sources said that there is no doubt that the dissidents are intent on trying to achieve what in their terms would be a “spectacular” - the killing of police, soldiers or prison officers - in the period around the Easter Rising commemorations.

Security sources said that while generally they were “ahead” of the dissidents, “occasionally they will get through and sadly that is what happened on Friday”. “When the intensity of the threat is as high as it is [NOW], it is almost inevitable that something will happen. We just have to keep bearing down on them,” added one senior source.

The same source said notwithstanding Friday’s attack and other less severe incidents, the PSNI, Garda and MI5 were enjoying successes against the New IRA: “There are a lot of their top people on remand or in prison although there always will be new blood to come up. The tactic is to keep trying to cut it off at the head.”

Last week a Police Federation of Northern Ireland video showed a police constable giving her young son a tight hug before heading out to work to later deal with suspect bomb devices.

Such family embraces are all the firmer following last week’s car-bomb attack by dissident republicans on a prison officer, which left him with serious leg injuries.

For years, even after the 1990s ceasefires, police, prison officers and soldiers have carried out daily security routines: such as examining their cars for underneath bombs.

However, that has intensified in the face of a clear determination by dissidents to kill members of the security forces in the run-up to the 1916 Easter Rising commemorations.

“They are very aware of their own security environment, of where they socialise, who they socialise with, the patterns they set up,” said the federation’s Mark Lindsay.

Precautions include taking different routes to work, breaking patterns of activity that could leave them vulnerable. Even off-duty, the guard is not dropped. Strangers in the neighbourhood are noted.

The safety checks extend beyond the officers themselves, including partners, children and wider family, with family members careful not to disclose they have a relative in the PSNI.

“Despite the terrorist threat, they are still going out and doing normal, everyday policing for the members of all communities. Officers are not just a uniform. They are an integral part of society,” said Mr Lindsay.