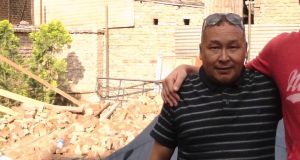 Dawa Chhiri Sherpa: “Our houses are gone and my 16-year-old son is not sleeping well, but I have no information at all about my family back at home”

Dawa Chhiri Sherpa speaks English with a hint of an Irish accent, due to his close relationship with many from these parts who are drawn to the Himalayas.

Throughout the past six days, he has been minder, manager, provider and friend to a number of Irish and European climbers and trekkers caught in the aftermath of the earthquake, while also delivering food-laden rucksacks to refugee camps in Kathmandu.

Accompanying him by motorbike is Irish trekking company director Ian Taylor, who says he has distributed tents and stoves, and brought water and food to several districts within reach of Thamel, where his office is based.

“We have seen some evidence of the Nepali army, and Korean and Indian relief organisation personnel,” Taylor saysvia Skype. “In several of the camps, I was told I was the first white face that people had seen all week.”

He says he has marvelled at Dawa’s response and that of the Nepali people who have survived the magnitude 7.9 earthquake. “In my darker moments, I had visions of Hotel Rwanda situations and a descent into anarchy, but we have witnessed none of that,” Taylor says.

Trekkers returning from Mera peak in the Solukhumbu region of the Himalayas had told of some tension between tourists .

“There’s been some looting here in Thamel, but generally people are very calm, resourceful, even in the midst of no water, no electricity, no food, no obvious government response – coping far better than we westerners would,” Taylor says.

“With no one to check if their homes are safe, that’s the biggest challenge,” Taylor says.

Dawa’s nagging concern all week has been the safety of his relatives back in his home village of Pikeypeakgoli, some 2,300 metres up in the Solukhumbu. The village of some 453 houses lies under the 4,065m-high Pikey peak.

“ Our temples and our monasteries are gone and our stupas [Buddhist shrines] are not lit,” Dawa says. “Our houses are gone and my 16-year-old son is not sleeping well, but I have no information at all about my family back at home.”

His village is a 10-hour journey by bus. Although he has close connections with a helicopter company in the capital, the focus of helicopter crews has been on rescue and relief in the immediate areas, close to the capital but far by road due to highly mountainous terrain.

“I know the village people will be trying to make shelters from bamboo, but even the land may be destroyed, so there will be no food for a long time,” Dawa says.

“I’ve got dried noodles and rice and water – I shopped already – and I will take a lot of photos for Ian,” the sherpa says.

“I feel responsible for them,” says Taylor, who climbed Everest with Graham Kinch in 2008 to raise funds for a primary school in Uganda.

He is already planning a relief expedition for the long and difficult months ahead.

5 EU seeks to access AstraZeneca vaccines produced in US