National Library warns it will have to cut services 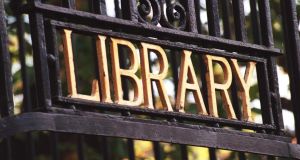 The board of the National Library of Ireland has warned that it will have to reduce services and will not be able to play a full part in the Decade of Commemorations because of further budget restraints.

The board said it was “extremely disappointed” that no increase in its funding was given in last month’s budget despite prior warnings it needed another €1 million to maintain services.

It has warned the Department of Arts, Heritage and the Gaeltacht that it now faces “very unpalatable and unavoidable decisions with regard to service provision in 2015”.

In particular it said it would not be in a position to play its “potential full role” in the Decade of Commemorations.

The library received an allocation of €6.4 million in the recent budget, the same figure as for this year despite complaining that its funding had been cut by 44 per cent since 2008.

The board has written to the department warning it will close its photographic archives facility in Temple Bar, which includes a genealogy service to the public during the summer, and reduce its evening opening hours in the National Library without an increase in funding.