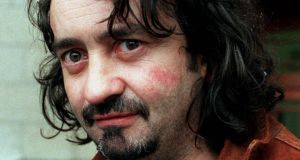 Gerry Conlon: “Gerry had a strong sense of social justice and an uncompromising desire to right the wrongs that had been suffered by others.”

A steady stream of mourners made their way to the Lower Falls in west Belfast yesterday to pay their respects to Gerry Conlon who died on Saturday aged 60.

He was one of four people wrongly convicted for the 1974 IRA Guildford bombings in England in which five people were killed and 65 injured.

Mr Conlon, who was being waked at the house of his sister Anne, was very recently diagnosed with lung cancer.

His funeral will take place on Saturday after 10am Mass in St Peter’s Cathedral in west Belfast. He is survived by family members and his partner Alison and their daughter.

Over the weekend many tributes were paid to Mr Conlon who in 1989 with the rest of the Guildford Four was cleared of any involvement in the bombings. His father Guiseppe who had travelled to London to assist him was also wrongly arrested. He died in prison in 1980.

He said he spoke to Gerry Conlon and his late mother Sarah at their home in 2005.

Mr Durkan said however that his release, declaration of innocence and the apology “did not end the nightmares that haunted every sleep – with his searing, hurtful experiences replaying like a video that he couldn’t switch off”.

“He was doggedly decent as well as doggedly determined. He combined wit with grit and was truly inspiring in his outlook and his special articulacy,” said Mr Durkan.

He added, “In later years Gerry drew from his experiences to campaign on behalf of others with the group Miscarriages of Justice Organisation. His loss will be felt both within the community in west Belfast and across the world with all those who work in pursuit of justice.”

“Gerry Conlon and his father Guiseppe were two of the most infamous examples of miscarriages of justice by the British political and judicial system,” he said.

The Fianna Fáil spokesman on foreign affairs Brendan Smith expressing his condolences said, “Gerry was the subject of a deeply unjust miscarriage of justice but his dignity and grace during his detention and upon his release resonated with families all over Ireland and around the world.”