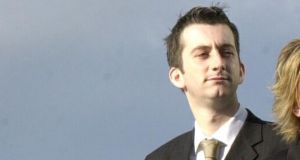 William Lavelle of South Dublin County Council: said he had concerns about the “large number” of open planning enforcement files, many of which were a number of years old. Photograph: Cyril Byrne/The Irish Times

“Since the middle of 2015, a second planner has been assigned to the planning enforcement section to undertake assessments, inspection and reports on planning enforcement complaints,” Mr McLoughlin said. “There are now a total of two assistant planners undertaking this role on a full-time basis and this will continue in 2016. In addition it is hoped to assign a third member of staff to the role of planning enforcement inspector in early 2016.”

Mr Lavelle said he had concerns about the “large number” of open planning enforcement files, many of which were a number of years old. “Residents and communities are being left frustrated in many cases by the delays in responding to their concerns about alleged unauthorised developments,” he added.

“I welcome the efforts by SDCC management to increase the staffing of the planning enforcement section.”