An unbelievable, devastating event in Cavan has gripped the nation by the heart 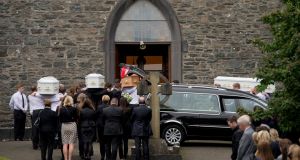 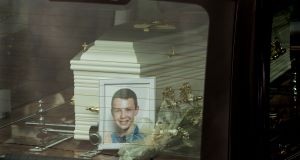 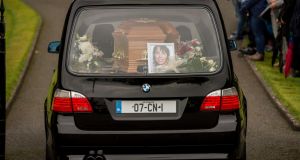 The photograph the families chose was placed on a wooden stand in the church porch.

A lovely portrait of Alan and Clodagh Hawe, smiling for the camera with their three boys Liam (13), Niall (11) and Ryan (6). The sort of framed photo you see in most homes — a happy childhood moment captured forever as its subjects grow and change around it.

This was the image the Coll and Hawe families wanted to show people who didn’t know the young family they loved.

There was also a small box on the stand, with a neat stack of brown envelopes alongside and a polite request to mourners to make a donation to suicide charity Pieta House in lieu of flowers.

Six days earlier, in an act of unspeakable violence, Alan Hawe killed his wife Clodagh in their home and then took the lives of his three sons as they lay in bed. Before he killed himself, Hawe left a note pinned to the back door of the house warning the next caller not to go inside but to call the gardaí.

That person was Clodagh’s mother, Mary.

Then the sheer horror of what had been done unfolded. An entire family, gone. Nothing left but terrible questions.

And one reality on a late Saturday afternoon in rural Cavan, when the Coll and Hawe families buried their dead after requiem Mass in St Mary’s Church in the parish of Castlerahan and Munterconnaught.

A week ago, their world was normal.

Now, they are at the centre of an unbelievable, devastating event. It has gripped the nation by the heart.

Now, for them, media discreetly positioned at church gates. TV satellite vans parked nearby. A procession of hearses. Five coffins at an altar. And a dozen clerics, including one bishop, to concelebrate mass with local curate, Fr Felim Kelly.

After the funeral service, a numbed community walked the few yards with their grieving neighbours to the adjoining churchyard, where the expanse of green canvas on the ground covering the burial plots drove home the scale of the tragedy visited on one small townland near Ballyjamesduff.

The old church is right across the road from the primary school where Alan Hawe was vice-principal and where his two younger sons attended. Clodagh Hawe taught in Oristown national school, not too far away, in Co Meath.

Teachers and pupils from both schools lined up outside St Mary’s before the cortege arrived, although there was no official guard of honour. The younger ones, in particular, were minded well.

Students from Virginia Community were there in what was described as “a show of solidarity” with eldest boy, Liam. They wore their school uniforms.

The funeral took place at an unusually late hour because the church had already been booked for a wedding. It was a poignant juxtaposition in a day promising such hope and celebration for some families and utter desolation for others.

But life continues. And so, a few hours before the funerals began, a cream vintage car was parked outside St Mary’s with a liveried chauffeur in knee-high leather boots standing next to it. As the wedding ended, a song drifted into the silence outside.

“It’s a Whole New World” was playing as the happy newlyweds made their way down the aisle. A little flower girl in cream satin and ballet pumps skipped after them, a Yorkshire terrier wearing a doggie tuxedo running beside her on a leash.

Fr Felim made a fuss of the wedding party and took the hands of a grandmother before remarking “Ah, I know she gets her good looks from!”. The curate, who would later describe himself as “the old man” when remembering how the Hawe children showed him how to build with Lego one Christmas, attended to his duties.

He looked tired, rushing around the church as the wedding people left quickly and parishioners worked quickly to prepare the interior for the funeral.

“It’s been difficult, but Fr Felim, he’s sharp as a tack” said one parishioner with great affection.

The cortege would be coming the hill along the Oldcastle road before turning left into the church. Men from the surrounding area, many more than would have been possibly needed, mustered along the roads and in the carparks wearing high-vis vests, anxious to help.

More, dressed in black suits, black ties and white shirts, had volunteered to act as pallbearers. They waiting in the grounds next to the grotto.

And, of course, the local GAA club turned out in force. Alan Hawe was an enthusiastic and active member and his sons were also big into sport. Like everyone else, club members were trying to come to terms which what happened, asking how the hell a man they thought they knew could commit such a terrible crime against his family.

The five were brought together to church and laid to rest together in the tiny graveyard. This was in accordance with the wishes of both immediate families.

When the hearses arrived, they were driven into the eerie silence which enveloped the area around the church all afternoon. A spray of white roses was placed beside all the coffins, along with individual photographs.

Clodagh Hawe’s coffin was first through the gates. Then the vehicle carrying Liam was to go next, but the hearse stalled and couldn’t be restarted. There was an agonisingly long wait for family members following behind in funeral cars until, finally, pallbearers came down the slope and carried the first of the white coffins past the stone Celtic cross in the middle of the driveway to the church doors.

Next was the middle boy, Niall and then little Ryan. Finally, Alan Hawe’s coffin was driven in. It was draped with a red and white GAA jersey.

Inside the packed church, the three white coffins were flanked by the two oak. Ryan rested in the middle of the line, his photo looking straight down the centre aisle.

It was a deeply moving service. A community in shock and grief, trying to keep it together.

At the beginning of the Mass, symbols were presented at the altar as “a snapshot of the positive qualities of the family.”

For Clodagh, brought forward by her mother, a family photograph “crystallising her greatest gifts – wife, mother and promoter of family values.”

For father Alan, the GAA jersey. And a basketball for Liam, a sports trophy for Niall and “a woolly dog with appealing eyes” for Ryan.

Beguiling “Ryan the rogue” as Fr Felim called him, with a smile.

Some of the infant pupils from Ryan’s school sang a song during the Offertory procession, their young, innocent voices filling the sadness. It was too much for the grown-ups, many quietly sobbing.

The curate asked the congregation to focus on “two families united in support and brokenness, sharing the burden, bewildered, pained and yet heroic.” And he cried “how much more can a family endure!”

He told good stories about the family he knew. But he acknowledged “the dark side” of this story.

But answers there came none. “It is not for us to seek answers or to surmise about behaviour. We all are trying to cope with a tragedy beyond our understanding.”

All he could offer was faith, hope and love.

“In life we loved you dearly, In death we do the same...” read Clodagh’s sister, Jacqueline, struggling to contain her grief. “It breaks our hearts to lose you all, You didn’t go alone. For part of us went with you all, the day God called you home.

Outside, the chestnut leaves are turning. The school across the road will open as normal. The media moves on.

Questions will have to be asked. In time, there might be answers. Saturday was not the time.