Miriam Lord: O’Herlihy’s family at the heart of final farewell 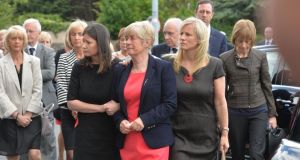 Sally (left), Jill (right) and Hilary O’Herlihy, daughters and wife of Bill O’Herlihy at the funeral Mass of the RTÉ presenter at the Church of Our Lady of Perpetual Succour in Foxrock, south Dublin. Photograph: Alan Betson

Together for the last time, they moved slowly towards the church door as the funeral bell tolled. And in our imagination, we half expected to hear Johnny or Liam or Eamo shout out mid-procession. “Stop it there, Bill. Stop it there!”

But, of course, they didn’t, because this time, they couldn’t.

Bill O’Herlihy had two pillars in his life, said his friend Fr Tom O’Keefe, chief celebrant at his Requiem Mass yesterday. His family and his faith.

At the centre of Bill’s universe: his wife Hilary, daughters Jill and Sally and five grandchildren – they were the love of his life. But there was family too at Foxrock Golf Club where past president O’Herlihy and Fr O’Keefe were two “proud Corkmen, struggling to keep our accents and our handicaps under 20”.

And not forgetting his “very dysfunctional family on TV – with his three amigos that he loved to provoke and found it hard to discipline at times.”

Those three amigos – John Giles, Eamon Dunphy and Liam Brady – helped carry Bill’s coffin from the church of Our Lady of Perpetual Succour in Foxrock in south Dublin.

They looked brokenhearted. Dunphy was in tears. They weren’t expecting this. Their pal died in his sleep on Monday at the age of 76.

Bill O’Herlihy was much more than a broadcaster; he was the man who anchored the sporting dreams of a nation.

President Michael D Higgins – a football man – attended and the Taoiseach was represented by his aide-de-camp, Kieran Carey. Proper order.

Because with Bill gone, it really is the end of an era. At the heart of the ceremony was his grieving family. But many also came to recall the Bill they knew. People from the worlds of journalism, politics, sport, public relations, entertainment and broadcasting.

“For Bill, to be a killjoy was a contradiction of what it meant to be a Christian,” said Fr O’Keefe, describing his friend as a source of joy and light. “Don’t curse the darkness, light a candle – that was Bill.”

He recalled visiting his home not so long ago. The walls were festooned with photographs of family get-togethers and celebrations.

“And there wasn’t one photograph depicting his own awards or his own achievements ... The family were central.”

Daughters Jill and Sally spoke lovingly of their dad from the altar. About how he was a wonderful storyteller in every aspect of his life, and had a weakness for jelly and custard and ice-cream.

Bill’s brother recalled him accepting The Spirit of Cork award just two weeks ago. “I can’t imagine him not being from Cork.”

Fr O’Keefe, parish priest in Cabinteely where his old friend and golfing partner attended Mass, wrapped up his homily by remembering Bill’s parting words when he signed off on this television career last year.

“I’ve been privileged to serve you, the viewers, and you have been astonishingly generous down through the years.’ Bill, they were your final words of farewell. Let me tell you that those words are very typical of your magnanimous nature. But really, it’s our privilege to have known you and be your friend.”

Former government press secretaries Seán Duignan and Joe Jennings attended, along with the likes of Rodney Rice and Mike Burns from Bill’s time in current affairs. The boys from Apres Match were there too and a host of old colleagues from the newspapers. Near the end, when the Vard Sisters sang a beautiful version of Over the Rainbow, even the grizzled old sports hacks were blinking back the tears.

The Three Amigos shadowed Bill to his final resting place in Shanganah cemetery.

And came away with the memories. They didn’t leave them there, so.