Minister for Time confirms Santa will arrive in Ireland...on time 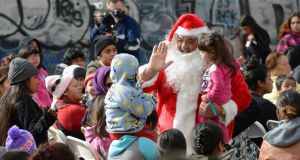 A man dressed as Santa Claus greets children and families waiting for holiday gifts and toys to be distributed to underprivileged children at the Fred Jordan Mission in Los Angeles. Photograph: Phil McCarten/Reuters

Minister for Time with a sideline in Justice, Equality and Defence Alan Shatter has assured children that all necessary arrangements have been made to facilitate the arrival of Santa Claus on Christmas Day.

Mr Shatter, in his role as the Minister for Time, who has responsibility for the issuing of visas, said: “I want to assure children across Ireland that all necessary arrangements have been made to facilitate the timely arrival of Santa Claus on Christmas Day.

“Santa’s journey will, as usual, be tracked by the North American Aerospace Defense Command (known as NORAD). Girls and boys can follow his progress on noradsanta.org. He may also be sighted by the Irish Air Corps Radar System when he comes over the horizon late on Christmas Eve to visit families throughout the State.”

Mr Shatter has waived excess baggage travel charges on the sacks of presents Santa wll be taking on his sleigh.

“Both An Garda Síochána and members of the Defence Forces stand ready on alert to provide him with any assistance required to ensure that all his reindeer, including Rudolph, are properly fed and watered.”

As chairman of the Government Task Force on Emergency Planning , Mr Shatter has asked Met Éireann to ensure that a speedy response be given to any requests Santa makes for information on any threatened extreme weather conditions that could impede his progress.

Despite the challenging conditions, the Minister is confident Santa will be as efficient as ever

“Because of the speedy manner in which he goes about his business and the common travel area between Ireland and the UK, it is anticipated that Santa Claus will deliver his Christmas presents throughout Ireland and the UK in the blink of an eye,” he added.

The Minister added that he hopes children and their families all over the country have a great time over Christmas.