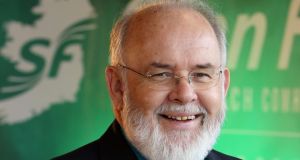 Sinn Féin parliamentary candidate for Mid Ulster Francie Molloy: “Lough Neagh is one of the gems we have in Mid Ulster.” Photograph: AFP/Getty Images

The Mid Ulster constituency lying between the Sperrin Mountains in the west and Lough Neagh in the east was held by the DUP’s William McCrea for 14 years until Martin McGuinness won the Westminster seat for Sinn Féin in 1997.

When McGuinness resigned to concentrate on being Stormont’s deputy First Minister, party colleague Francie Molloy took 46.9 per cent of the vote at a 2013 byelection in the largely rural constituency.

At the time, the DUP and UUP both backed independent candidate Nigel Lutton, the son of an RUC reservist killed by the IRA in 1979.

On May 7th, William McCrea’s son Ian, a DUP MLA, is challenging Molloy, while McCrea senior faces competition for his South Antrim seat from the UUP’s Danny Kinahan.

In Mid Ulster, the Alliance Party, the SDLP and the Workers’ Party have candidates in the running, alongside Sandra Overend for the UUP and Westminster hopefuls from TUV, Ukip and the Conservatives.

The abstentionist incumbent, like Sinn Féin colleagues standing in what are seen as safe republican seats, is not complacent. “Our main target is to maximise the vote and to increase the majority we had the last time,” he says. 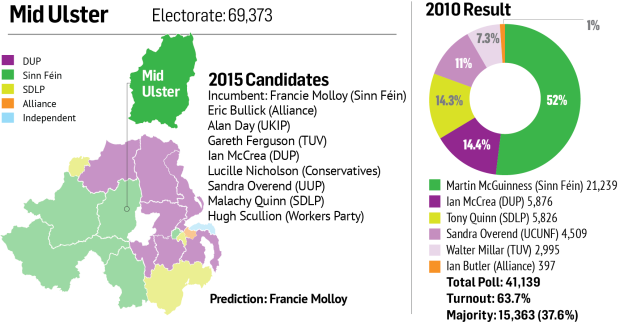 Molloy (64) says being a councillor for 26 years and an MLA for 15 years, as well as his time as deputy Speaker at Stormont, has given him a full picture of issues impacting Mid Ulster.

Job creation is a major talking point when canvassing in areas such as Magherafelt, Coalisland and Cookstown, where Molloy’s constituency office is based. There is a “continuous development and a need for new factories”.

There are some bright employment examples, he adds, such as “86 per cent of the world’s mobile crushing equipment for the quarry and sand and gravel industry is manufactured in east Tyrone”.

Molloy speaks of being “particularly heartened” when approached by unionists who he claims represent half of those seeking his assistance in the constituency. “We see it as one community, right across the board”. Unionist competitors here would say he is grossly exaggerating in terms of the local outreach to unionism.

Molloy had been in line for the role of Speaker at Stormont that party colleague Mitchel McLaughlin now holds. Still, he says being MP is compensation because he enjoys providing a constituency service.

Molloy has not been as active on social media as other politicians during the Westminster campaign. He apologised last month following comments he made on Twitter about a BBC Northern Ireland Spotlight programme into alleged sexual abuse by an IRA member.

“I am more of a face-to-face person and more on the ground within the constituency,” he says. “But it is an important aspect of communications, and I am not shying away from it in anyway.”

Molloy says Sinn Féin is keen to support entrepreneurs and ensure that investment is made in Mid Ulster.

He also wants to see a focus on tourism and Lough Neagh, the largest freshwater lake in Ireland, brought into public ownership.

“To me, Lough Neagh is one of the gems we have in Mid Ulster which hasn’t been fully exploited on behalf of the people. But it needs support and it needs back-up to do it. Now is the time to invest in Mid Ulster.”