Meeting all demands of teaching unions will be very costly 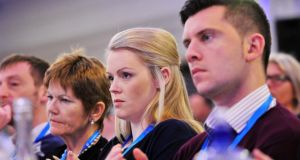 The various teaching unions have all made it clear they want the Government to provide pay parity for teachers appointed on lower salary scales after 2011, and to reverse all the outstanding pay cuts imposed during the austerity years.

However, addressing these issues will be costly, and if unions set strict deadlines for their demands to be met it could make very difficult the prospect of negotiating a successor to the Lansdowne Road accord and increase the likelihood of further unrest in schools.

Delegates at the ASTI conference in Killarney on Tuesday voted to “vigorously oppose” any future national agreement that did not guarantee equal pay for equal work, provide an end date for pay restoration and terminate financial emergency legislation.

Members of the TUI at its conference will on Wednesday debate calls for a ballot on industrial action to be held in October if full pay and pension parity for recently-appointed teachers is not secured by September.

Given there is no funding available this year for further public service pay initiatives, meeting a September deadline would not be feasible.

However, there are amendments tabled at the TUI conference which would qualify the motion significantly, so it remains to be seen what stance the union will adopt.

The two-tier pay structure stems directly from decisions taken in 2011 by the then government to cut pay and abolish allowances for staff appointed after that date. While large elements of these cuts have been reversed, significant pay gaps remain in place.

Minister for Education Richard Bruton told the Dáil last November that in the case of education and training sector employees, including teachers, the estimated cost of restoring pre-2011 pay scale arrangements for staff appointed after that date would be between €65 million and €70 million per annum. He said the cost of such measures across the entire public service would be substantially higher.

After the report of the Public Service Pay Commission next month, the Government will have to decide on its strategy for the forthcoming talks on a new deal with the public service unions. It will have to calculate, as part of its pre-budget arithmetic, how much it intends to set aside for pay rises next year, which will be the key element of any new deal.

The existing Lansdowne Road deal costs about €300 million per year to implement.

Given that Ministers were last week speaking of an overall fiscal space of about €600 million for next year, it would seem unlikely that there will be money available to reverse all the various cuts in one go, a move which the Government has estimated could cost over €1 billion. More likely is that any deal would offer the prospect of phased pay restoration over time .

Another issue on which the Government will have to take a position is the requirement of public service staff to work additional unpaid hours.

The previous official position of Ministers has been that while pay cuts would be reversed over time, productivity gains such as the additional hours were permanent. However, the requirement to work these additional hours is hugely unpopular, and was one of the root causes of the dispute last year involving the ASTI.

It is precisely such powers that have been used to withhold increments and other benefits from members of the ASTI.

While the government may have considered such powers as being necessary to enforce the integrity of national agreements in very difficult times, they are viewed by unions as draconian measures.

The Government’s position on whether it would want to hold on to such powers to shore up any successor to the Lansdowne Road agreement has not yet been made clear.