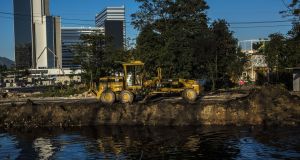 A leading scientist has said Rory McIlroy is taking “a perfectly sensible precaution” by staying from the Rio Olympics if he is intending to become a father shortly, though he has “little to worry about” if he is not.

The golfer said on Wednesday he will not compete in Rio, with the risk of the Zika virus one he is “unwilling to take”.

The World number four golfer joins a growing list of golfers including Vijay Singh, Marc Leishman, Adam Scott, Louis Oosthuizen and Charl Schwartzel who have already said they will not feature in Rio.

Dr Derek Gatherer, Lecturer in the Division of Biomedical and Life Sciences, Lancaster University, said Zika is a risk to pregnant women and to men and women who are planning pregnancy.

“Another, much smaller, risk group is those who have had previous attacks of Guillain-Barre Syndrome (GBS) or who have been told by their doctors that they are at risk of GBS.

“If Mr McIlroy is contemplating becoming a father within a year or so, then it is a perfectly reasonable precaution to stay away from regions of active Zika transmission,” he said.

However, McIlroy has little to worry about if parenthood is not immediate, provided he takes “the usual precautions for tropical countries, which for Brazil now includes no unprotected sex for at least eight weeks after returning, even for men who experience no symptoms”.

Saying that McIlroy’s decision not to go to the Olympics should be respected, Prof Jimmy Whitworth, Professor of International Public Health, London School of Hygiene & Tropical Medicine, said, however, that golf courses “would not be particularly dangerous places for getting infected with Zika”.

The mosquitoes involved in transmitting the infection live around houses and rarely fly more than 50 metres from the breeding sites.

“For most people, Zika virus causes a mild illness, often not even clinically apparent. If you do become ill you will be fully recovered in a week or so.

Rarely, complications such as Guillain-Barre Syndrome may occur, but we should put this into perspective. This syndrome is as common or commoner after ordinary gut infections, such as Campylobacter, which are likely to be more common in Rio than Zika anyway.

“The most credible estimates suggest no more than 10-20 infections with Zika among the half a million athletes and visitors going to Brazil for the Olympics.

“For couples wanting to get pregnant or thinking of becoming pregnant there is a different balance of risks because of the dangers of microcephaly and congenital Zika syndrome.”

He said there are also now reports of a small number of cases being transmitted sexually. If a woman is pregnant, medical advice would be not to travel to Rio.

“If she is thinking of becoming pregnant, then she and her partner should delay conception for two months after returning and use barrier methods of protection. In the unlikely event of a woman or her partner of getting infected with Zika, they should delay pregnancy for six months, by which time all traces of Zika infection will have been cleared from the body. It’s important all travellers follow public health advice before travelling and while abroad.”

However, Professor Jonathan Ball, Professor of Molecular Virology, University of Nottingham, said McIlroy’s decision “does strike me as being extreme”, since the chances of being infected are low and people can protect themselves from mosquito bites by covering up and using a good insect repellent.

“Pregnant women are advised not to travel to an affected area, and couples planning to have children in the very near future should also consider how the risk of Zika infection may affect their plans. But we must remember that most people infected don’t even show any symptoms and serious illness, although reported, seems to be a very rare event,” he said.

1 Hotel restaurants, golf and tennis all in line for reopening but Government to warn ‘every contact counts’
2 Exiting Level 5: What will reopen, when will it happen and when will we know?
3 Forget Black Friday, welcome to Green Friday - 21 Irish retailers with great deals
4 Businesses can show ‘Dunkirk spirit’ by taking new direct ferry to France
5 Coronavirus search: How is Covid-19 spreading in your locality?
Real news has value SUBSCRIBE