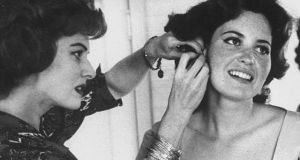 Hollywood actress Maureen O’Hara’s only daughter has been found dead in a property owned by the family at Glengarriff, Co Cork.

Ms Fitzsimons was staying in the family home in Glengarriff and was last seen locally on Tuesday.

A home help discovered her body on Thursday. It is understood the death is not being treated as suspicious. The pensioner was found sitting in an armchair.

Ms Fitzsimons has a son, Conor Beau Fitzsimons, a hairdresser.

She was named after the character played by Anna Lee, her mother’s co-star, in How Green Was My Valley (1941).

She took her last name, ‘Fitzsimons’, from her mother’s original last name.

Her mother helped her started in movies with a cameo in Spencer’s Mountain in 1963.

Before she had a family, Ms Fitzsimons made frequent appearances on television in shows like The Virginian and McHale’s Navy and also had a part in a movie, The Ravagers.

Maureen O’Hara died in November of last year. Her daughter continued to visit Glengarriff having made friends in the area.

Her mother Maureen was born in Ranelagh, Dublin in 1920. She was the eldest of six children in the Fitzsimons family.

The Abbey Theatre-trained actor became a naturalised US citizen in 1946 and held dual Irish-US citizenship.

Her early films included My Irish Molly and The Hunchback of Notre Dame, but it was for director John Ford’s The Quiet Man (1952), in which she starred opposite John Wayne, that she will be best remembered.