Mary Keane, wife of playwright John B Keane, has died 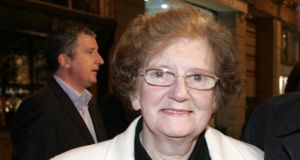 Mary Keane, wife of the late playwright John B Keane, has died.

The 86-year-old mother of four had been ill for some time.

A native of Knocknagoshel, the hilltop village on the Kerry-Limerick border, the late Mary Keane’s maiden name was O’Connor.

She met Keane at a dance during the harvest meeting of Listowel Races in 1949 and they married in 1955.

The young couple set up a pub in William Street.

Keane died in 2002 always credited his success to her support.

Mary is survived by their four children, Billy, Conor, John and daughter Joanna along with 13 grandchildren.

Close friend of the Keane family, Minister for the Diaspora Jimmy Deenihan has expressed his condolences.

“Mary was a very close friend of mine and will be dearly missed by many in the community. I would like to express my condolences to Mary’s children Joanna, Billy, Conor and John and to her grandchildren.

“Mary was a great support to John B throughout his career and he often credited her with being his greatest inspiration. Since John B’s death Mary has continued to promote his work by attending new productions of plays all over the country.

“Mary was also a leader in the establishment of Áras Mhuire, a community nursing home in Listowel,” he said. “Today we lost a wonderful woman.”