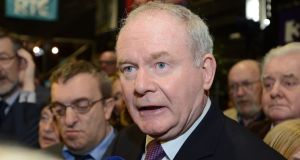 Martin McGuinness has re-iterated his commitment to Sinn Féin holding a commemoration later this year for the Irishmen who died in the first World War. Photograph: Dave Meehan/The Irish Times

Sinn Féin’s Martin McGuinness has re-iterated his commitment to the party holding a commemoration later this year for the thousands of Irishmen who died in the first World War including at the Battle of the Somme in 1916.

Northern Ireland’s Deputy First Minister said it was important that those Irishmen who died in the First World War were remembered for the sacrifice they made as many were Irish nationalists who went to fight in Europe in the hope it would lead to a free and independent Ireland.

“I come from a school of thought that recognises that many Irish men, some 40,000 lost their lives in the first World War . . . many of those people were actually Irish republicans, Irish nationalists who thought their contribution would lead to a free and independent Ireland,” he said.

Mr McGuinness instanced the case of one of his own political advisers, Conor Heaney from Derry whose grandfather and granduncle both died in the first World War and whose names are inscribed on the War Memorial in Derry.

Asked about Sinn Féin in Co Kerry objecting to a memorial in Tralee to members of the Munster Fusiliers who died in the conflict, Mr McGuinness said he was not aware of any such objection but he firmly believed that those who died in the war should be commemorated.

“We are working on it and I can absolutely I can give you my word that I will be part of commemorating those Irish men who lost their lives in the first World War,” said Mr McGuinness during a visit to Cork city.

Last month during a visit to Co Cork, Mr McGuinness acknowledged the political intricacies of the period when both Irish nationalists and Irish unionists went to fight in the first World War, but said he believed those who died in the slaughter should be recognised and commemorated.

He spoke of Meath born poet, Francis Ledwidge, a fervent nationalist who joined the Irish Volunteers but, at the urging of John Redmond, enlisted in the Royal Inniskilling Fusiliers and was killed in Ypres on 31st July 1917.

“Like so many other Irish people who believed that their contribution to the first World War would lead to the freedom of small nations and who lost their lives fighting in France and Flanders and elsewhere, Ledwidge also paid the ultimate sacrifice.

“The politics of it were terrible but I look at the humanity and the fact that tens of thousands of our countrymen lost their lives, it’s only proper and right that I as an Irish republican leader, should remember their sacrifices and I will do that, I intend to do that.”