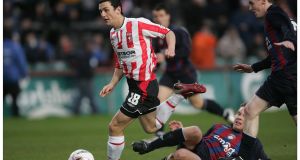 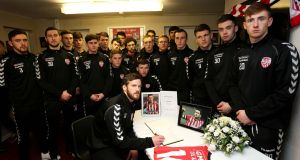 A book of condolences over the death of Derry City player Mark Farren is signed by members of the club at Brandywell Stadium, Derry. Photograph: Lorcan Doherty/Presseye/Inpho 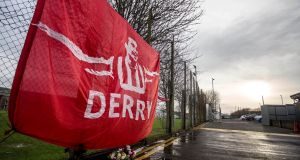 Soccer star Mark Farren has been laid to rest alongside his late triplets after his battle with cancer.

The 33-year-old has been remembered as one of the finest soccer talents ever to come out of his native Co Donegal.

There were heartbreaking scenes as Mark, who played most of his football with Derry City, was laid to rest alongside his children Terri, Marlie and Millie, who all died around the time of their births in 2014.

Many well-known faces of sport and politics turned out to say farewell to the man who became Derry City’s record goalscorer, with 114 goals in 209 appearances.

President Michael D Higgins sent a handwritten note of sympathy to the Farren family in which he praised Mark’s “strength of character and his generosity as a colleague and club member”.

Mark’s heartbroken wife Terri-Louise walked behind the coffin, draped with jerseys from both Derry City and Glenavon, into the church.

She was supported by Mark’s parents Michael and Kathleen, his brother Philip and sisters Bridget and Catrina.

Members of Derry City FC and Mark’s first club, Greencastle FC, formed a guard of honour into the church.

Among the many floral tributes were two in the shape of jerseys from Derry City and from Glenavon, who Farren played with in the Irish League.

Another in the shape of Mark’s No 18 jersey, now officially decommissioned by the club, was sent by the Brandywell Pride Supporters Club.

Among the memorial gifts brought to the altar was a wedding photo of Terri and Mark’s nuptials, and a football with which Mark scored a hat-trick.

Speaking at the funeral Mass, Fr Michael Canny, a friend of Mark’s, paid tribute to a person he described as leaving an “indelible mark” on the lives of many, particularly those involved with football and Derry City FC.

He said: “In the eight years since his first diagnosis, Mark has fought a good fight, assisted by Terri his wife, his family and many really good friends.”

Fr. Canny added:“His marriage to Terri in 2009 was a very happy occasion for him. He loved his wife and football, and loved the prospects of being a father.

“Unfortunately his time as a father was to be very short because of the death of their triplets Terri, Marlie and Millie.”