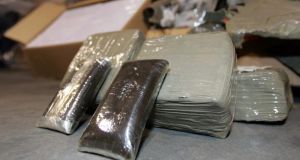 A 40-year-old man who swallowed more than 1kg of cannabis resin in a bid to smuggle it into Ireland has been jailed for a year by a judge who said there must be a deterrent for people trying to smuggle drugs into Ireland. Photograph: Collins.

A 40-year-old man who swallowed more than 1kg of cannabis resin in a bid to smuggle it into Ireland has been jailed for a year by a judge who said there must be a deterrent for people trying to smuggle drugs into Ireland.

Unai Arresse Aguirregabica, a Spanish national with an address at Estapona in Spain, pleaded guilty at Cork Circuit Criminal Court today to importing €6,600 worth of cannabis resin at Cork Airport on August 10th last.

Det Garda Robert Kennedy told the court that Aguirregabica had disembarked from a flight from Malaga and was making his way through Customs when a Customs sniffer dog, Max gave a positive indication that he was carrying drugs.

Aguirregabica was questioned by Customs officers and he admitted that he had ingested cannabis resin and he was arrested by gardai who took him to Cork University Hospital where he spent several days emitting 157 pellets of cannabis resin.

Det Garda Kennedy said that Aguiregabica had admitted making similar trips with ingested drugs elsewhere in Europe but when gardai checked with Interpol, they found that he was not known to police in Malaga.

Defence barrister, Don McCarthy BL said that Aguirregabica only got involved in the operation when his restaurant business got into difficulty and he ended up with debts of €120,000 and he asked Judge Seán Ó Donnabhain to take into account his guilty plea.

He pointed out that Aguirregabica had been in custody since August and he suggested that perhaps Judge Ó Donnabhain could deal with the matter by taking that into account and suspended any further sentence to allow him to return to Spain.

Judge O Donnabhain noted Aguirregabica’s guilty plea and said that as a Spanish citizen with no English and his family back in Spain, he would not benefit from visits while in prison in Ireland, making jail more difficult for him than for an Irish citizen.

However, Judge Ó Donnabhain said he did not think allowing Aguirregabica to return to Spain would be sufficient, particularly taking into account he was a mature 40 year old and the preparation and planning that went into the attempt to smuggle the drugs into Ireland.

Sending him back to Spain after serving three months on remand would not be a sufficient deterrent and a sentence of 12 months from today’s date was the minimum sentence he could impose, the judge said.