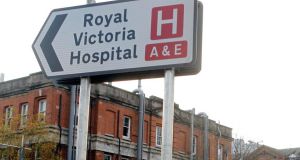 The injured man was transferred to the Royal Victoria Hospital in Belfast for specialised face and eye treatment.

Sinn Féin has accused dissident republicans in south Armagh of “attempted murder” after the son of a party activist was injured on Wednesday in an apparent booby-trap bomb attack.

The man was injured as he was taking down a poster from a pole close to his home about two miles from Crossmaglen.

He sustained injuries to his chest and face and, according to local Sinn Féin MP Conor Murphy.

There are fears the man may lose an eye.

He was brought to Daisy Hill Hospital in Newry and then transferred to the Royal Victoria Hospital in Belfast for specialised face and eye treatment.

The attack, Sinn Féin sources say, relates to continuing tensions in the area among party members and supporters and some local dissidents understood to be linked to the group Óglaigh na hÉireann.

Sinn Féin has characterised those responsible as members of criminal gangs involved in fuel laundering and other activity.

Some of the posters have accused some local Sinn Féin people as being “informers”. According to Sinn Féin this is because of the party’s support for the PSNI.

A number of people have been threatened by this group in recent weeks and months including Mr Murphy and the father of the man who was injured in the attack.

Mr Murphy said that the poster was placed near the injured man’s home in the premeditated knowledge that he or one of his family would act to remove it.

“Over recent months criminal gangs masquerading as republicans have threatened the family of the young man injured. Police recently visited the family and told them there was a threat from this group,” he said.

“Now these people have attempted to kill a member of the family with a device placed close to their home.

“In recent months death threats have also been made against a number of Sinn Féin activists, including myself.”

Mr Murphy added: “Let me be absolutely clear: this was the work of a gang of criminals and I unreservedly condemn this latest cowardly action. These thugs are opposed to the peace process and opposed to policing because of their involvement in organised crime.”

He said that he and Sinn Féin Assembly members Megan Fearon and Gerry Kelly recently met senior PSNI officers to demand that action be taken against the suspected perpetrators.

The Newry and Armagh MP said he understood that there were security concerns for police operating in south Armagh but nonetheless the PSNI had a duty to clamp down on those responsible.

“The threats have now escalated to what is clearly an attempt to murder people in the community opposed to their criminal activities. It’s well past time for the PSNI to act before someone is killed,” Mr Murphy said.