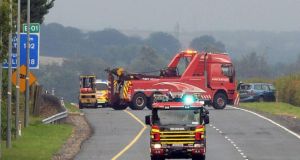 Gardaí and emergency services at the scene of the fatal cras on the M1 in Louth on Monday. Photograph: Eric Luke 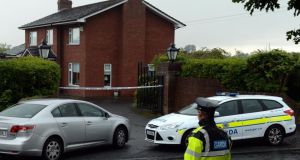 Gardaí at a house where a woman was found dead with serious head injuries near Hackballscross, Co Louth. Photograph: Eric Luke

A man believed to have murdered his wife before taking his own life by driving into oncoming traffic on a motorway near his Co Louth home had suffered from mental health issues over a prolonged period.

James Quigley (69), a company director, died when his car crashed head-on into a truck and car on the M1 northbound carriageway between junction 14 and 15 near Ardee at about 2.45pm on Monday.

When gardaí confirmed his identity they went to the family home at Rathmore, Hackballscross, apparently to break the news of his death to his wife Marie.

However, when they reached the large detached property at about 4pm they found the couple’s adult son Kieran at the house having just discovered his mother (68) dead in an upstairs bedroom. The house remained sealed off on Tuesday night.

Gardaí believe she was beaten to death by her husband before he left the family home in his car and drove into oncoming motorway traffic some 15 miles away in a deliberately act of suicide.

Three people travelling in the car he collided with suffered injuries and were taken to hospital.

The Quigley’s have three adult children and are well known in the area.

Gardaí are treating the deaths as a murder suicide and are not seeking anyone else as part of their inquiries.

As Mr Quigley is the only suspect for murdering his wife and he is now deceased, the case will never result in criminal charges.

The Garda file being prepared on the case will inform the coroner’s inquest into the death of the married couple.

The Quigley family had been hit by tragedy in the past, with the dead couple’s young son having died by drowning in the 1980s.

The postmortems the dead couple’s bodies will be carried out on Tuesday at Our Lady of Lourdes Hospital in Drogheda.

Indications are that Ms Quigley suffered severe head injuries and the house remains sealed off for continuing examinations.

Garda Supt Gerry Curley said an incident room has been set up at Dundalk Garda station and he appealed for anyone with any information in relation to the matter to contact Dundalk gardaí.

He said there was also an investigation into the fatal collision on the motorway and “the possibility of a link between the two incidents is a line of enquiry.”

“It is the early stages of the investigation so we are keeping an open mind and ensuring we cover all aspects.”

However, Garda sources have confirmed the case is being treated as murder-suicide.

Louth county councillor Declan Breathnach said: “this is a terrible tragedy and a terrible loss to the community. My thoughts are with the family and also with those injured in the accident.”

Funeral arrangements for the couple are expected to befinalised on Wednesday.