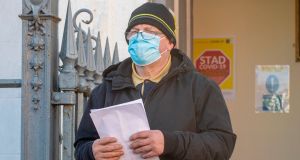 Jan Walowy was remanded on bail on his own bond of €250 to appear again at Clonakilty District Court on February 2nd. Photograph:Daragh Mc Sweeney/Cork Courts Limited

A 60-year-old man has been remanded on bail on firearms offences after gardaí found a stash of guns and ammunition at a rented home in west Cork.

Jan Walowy, a Czech national and father of two, was brought before Bandon District Court and charged by gardaí with a total of four firearms offences.

He was also charged with a fourth count of possessing 12 rounds of .455 ammunition also at Molaga Street, Clonakilty on the same date.

All four offences are contrary to Section 27 of the Firearms Act 1964 and he was charged with them by Det Garda Jim Keane of Clonakilty Garda Station.

Det Garda Keane gave evidence of arrest charge and caution in relation to Mr Walowy and told how Mr Walowy gave different responses to each charge.

Insp Emmet Daly said that gardaí had no objection to Mr Walowy being released on bail on his own bond with a number of conditions attached.

Defence solicitor, Conrad Murphy said that he had discussed the matter with Mr Walowy and he was willing to abide by the bail conditions sought by gardaí.

Det Garda Keane said that gardaí were seeking that Mr Walowy would formally surrender his passport and identity card which had been seized by gardaí.

They were also seeking an undertaking from Mr Walowy that he would not apply for any replacement passport or identity card or other travel documents.

He said that gardaí were also seeking that Mr Walowy would reside at his home address and seek approval from gardaí before any change of address.

They were also seeking that Mr Walowy would sign on every Monday, Wednesday and Friday at Clonakilty Garda Station between 6am and 9pm.

Gardaí were also seeking Mr Walowy to abide by a 9pm to 6am curfew at his rented home on Molaga St and that he would abstain from all intoxicants.

They also wanted him to provide gardaí with a mobile phone number and keep it fully charged and in credit so gardaí could contact him at any time.

Lastly Det Garda Keane said that gardaí wanted Mr Walowy to give an undertaking to stay away from a number of named persons in the case.

Defence solicitor, Mr Murphy confirmed that his client, who works in a factory in Clonakilty, was willing to abide by all eight bail conditions sought by gardaí.

Judge Colm Roberts warned that any breach of bail would lead to Mr Walowy being taken into custody and Mr Murphy confirmed his client understood this.

Judge Roberts remanded Mr Walowy on bail on his own bond of €250 to appear again at Clonakilty District Court on February 2nd.