Majority of Cork heroin deaths due to mixing drugs 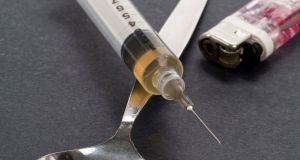 Cork City Coroner Dr Myra Cullinane said that a study carried out by her office found that there were no heroin-related deaths in Cork prior to 2004. Photograph: Thinkstock

The vast majority of the 87 heroin-related deaths in Cork over the past decade were caused by users taking the opiate with other drugs such as valium and xanax, a new study has found.

Cork City Coroner, Dr Myra Cullinane said an analysis of opiate related deaths in Cork city found the vast majority stemmed from polysubstance abuse and not from heroin on its own.

Dr Cullinane that most of the deaths involved heroin or some other opiate such as methadone being taken in conjunction with benzodiazepines such as Valium or Xanax.

Speaking at a Cork City Joint Policing Committee meeting, Dr Cullinane said that a study carried out by her office found that there were no heroin-related deaths in Cork prior to 2004.

Dr Cullinane said that there was a preponderance of male fatalities with some 60 of the 75 deaths recorded between 2004 and 2013 being men while 15 were women.

The analysis found that of these deaths, 28 died at home, 22 died in hospital, 12 died at the home of friend or relative and eight died in a hostel, said Dr Cullinane.

Two of the fatalities happened at Kent Railway Station while one person died at Cork Prison, another died in a squat and another person died on the street, she revealed.

Dr Cullinane said that Cork was unusual among modern 20th century cities in that it had no heroin- or opiate-related deaths prior to 2004, but since then the problem has escalated.

However, it was important to point out the rise has not been exponential since 2009 and that was down to the work done by the gardaí and other agencies in combating the problem.

Det Sgt Sean McCarthy of Cork City Divisional Drugs Squad said that heroin seizures accounted for 10 per cent of drug seizures by gardaí in the city between 2010 and 2014.

The heroin problem in Cork began to manifest itself in the mid-2000s when the number of heroin seizures went from nine in 2005 to 77 in 2006, he told the meeting

It led to the establishment of a specialist heroin drugs unit within the City Divisional Drugs Squad and its remit is to target those involved in the sale and supply of the drug.

“We target heroin dealers - we see those using heroin as victims,” said Det Sgt McCarthy adding that originally heroin was brought into Cork by dealers travelling by rail and bus.

However, dealers have become more sophisticated and now conceal drugs in bodily orifices and every deal sold in Cork has certainly been concealed in an orifice at some stage.

A deal of heroin sells on the street for €30 and to feed a habit, an addict would need two deals a day requiring them to get €400-€500 a week which has led to more drug-related robberies.

So far this year, gardaí have made 36 heroin seizures in Cork including one of quarter of a kilo worth €40,000 when they stopped and searched a car on the N8 on St Patrick’s Day.

While heroin users in Cork previously used to smoke the drug and were thus less visible, now addicts inject the drug resulting in the problem becoming more visible on the streets, he said.

Dr Declan O’Brien Clinical head of addiction Services at HSE South said they began seeing heroin use emerge in the mid 2000s and today they are working with some 150 heroin users.

At the beginning most drugs users were abusing just one substance but now heroin users along with other drug users are polysubstances abusers using more than one substance.