Major search operation for man who fell into River Lee 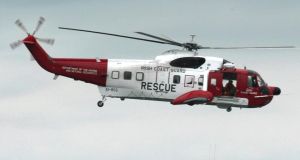 An Irish Coastguard rescue helicopter was involved in a search for the man who fell into the River Lee.

A major search operation is under way in Cork for a 35-year-old homeless man who apparently fell into the River Lee in Cork city early on Saturday.

The man, a regular resident with both the Simon Community and St Vincent de Paul in the city, was seen falling into the north channel of the river near the bus station at Parnell Place at around 7.20am.

Gardaí were notified and the Irish Coastguard at Valentia is co-ordinating a search operation for the man in the river opposite Parnell Place and downstream to Customs House Quay and beyond.

The Irish Coastguard Sikorski helicopter from Waterford, Rescue 117 was on a training exercise over Cork city at the time and diverted to assist with the search of the river for the missing man.

The helicopter was joined by Irish Coastguard Search Unit from Crosshaven as well as Crosshaven RNLI Inshore Boat and Mallow Search and Rescue have also arrived on scene to assist in the search operation for the man.

Just before Christmas, the bodies of two homeless people, Michelle O’Riordan (27) originally from Mayfield, and Paddy O’Driscoll (53) originally from Skibbereen were recovered from the River Lee at Custom House Quay.

Earlier this month, an inquest into their deaths at Cork City Coroners Court heard evidence that both died from drowning before the inquest was adjourned until a later date to allow a file be sent by gardaí to the DPP.