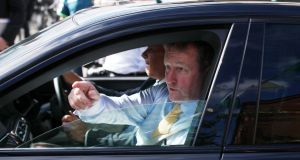 Taoiseach Enda Kenny: when he said Ireland was a special case, he signalled we did not “recognise the urgency” with which environmental action is required, said Senator Grace O’Sullivan. Photograph: Stephen Collins

A Green Party politician has described Taoiseach Enda Kenny as like the “lazy student who’d not opened a book all year” in seeking special exemptions over tackling climate change.

Senator Grace O’Sullivan criticised Mr Kenny for appealing for “time and space” at the climate change summit in Paris in December to deal with meeting EU targets of a 40 per cent reduction in greenhouse gas emissions by 2030.

“Special pleading has often defined the Irish approach to climate policy, with requests for exemptions and derogations where innovative policy proposals and genuine action should be,” she told the MacGill Summer School last night.

Mr Kenny blamed a “lost decade” of recession and “unrealistic” targets for failing to meet climate change targets but Ms O’Sullivan said this was akin to a “lazy student who’d not opened a book all year” asking “the teacher, in this case the rest of the world, for an extension on his overdue essay”.

Ms O’Sullivan said Ireland had failed in its collective response to climate change.

“When the Taoiseach went to the climate summit and publicly pleaded a special case for Ireland we essentially were admitting to the world that Ireland’s response is conditional, is going to be slow and does not recognise the urgency with which action is required,” she said.

She added that Ireland must “better balance the need to feed our own population, support a valuable and sustainable export market and [meet] our obligations to lessen the impact our way of life has on the long term viability of life on earth”.

She warned that if Ireland did not seriously address the issue of climate change “we are going to hand a crisis to our children that by 2050 will dwarf the banking crisis in scale and effect”.