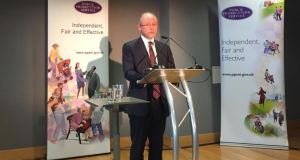 Northern Ireland’s Director of Public Prosecutions Barra McGrory apologises to three woman who accused an alleged IRA member of abusing them as children, after a damning report criticised how the prosecution was handled at the Public Prosecution Service offices in Belfast. Photograph: Gerry Moriarty/The Irish Times

Maíria Cahill has called on Sinn Féin to accept the findings of Sir Keir Starmer QC and to apologise to her.

Ms Cahill said she welcomed and accepted as genuine the apology issued to her by the North’s Director of Public Prosecution Barra McGrory over how the Public Prosecution Service dealt with allegations that as children, she and two other women were sexually abused by an IRA member.

In his damning report, Sir Keir issued 10 recommendations on how such cases might be avoided in the future. Mr McGrory accepted the report in full and said the recommendations would be implemented.

“The apology is welcome but I think what would be more meaningful is that the recommendations are quickly taken on board and implemented,” she said in Belfast after reading the 45-page report.

“For the last seven months [since the BBC Spotlight documentary] I have been repeatedly trailed through the media, my credibility has been called into question, people have said I wasn’t prepared to give evidence in a court of law, that the not guilty verdicts somehow presented some sort of reasoning or attack on my credibility,” she continued. “I think this report completely vindicates my position.”

Ms Cahill also said Sinn Féin had treated her badly since the story broke. She called on Sinn Féin to apologise and accept the report’s findings.

“The most disturbing thing for me in all of this is that the person who caused great hurt and trauma, not just to me but to his other victims, essentially was not prosecuted successfully,” she said.

“And also the other people who caused great hurt by forcing an IRA investigation into it. Had that IRA investigation not happened, we most likely would have been with the police making a criminal complaint long before we did.”

“At the Assembly’s justice committee we have continually raised the unacceptable and unnecessary delays. We welcome any recommendations that will support victims of abuse through the legal system and ensure justice.

“We will judge the recommendations of the report on how they well they serve victims in the future.”

Ulster Unionist Party leader Mike Nesbitt said Mr McGrory should “consider his position” as DPP in light of the findings. “The buck stops with Barra McGrory and he should consider his position. It is simply not acceptable to try to wash his hands, Pontius Pilate-like, by claiming the case was opened before he took office or that he was not directly involved,” he said.

“He is a very well paid leader whose organisation has failed a victim who has taken terrible abuse for having the courage to publicly take on the IRA, without the support she deserved from the PPS,” Mr Nesbitt added.

He said it was now essential that the Police Ombudsman Dr Michael Maguire published his review into the conduct of the police in the case.

“Maíria Cahill has demonstrated again and again that she will challenge anyone and any organisation when it comes to the truth of abuse,” he said.

“She does so on her own behalf. She also does so on behalf of other victims to ensure their voices are heard, their terrible experiences acknowledged and that accountability prevails.”

Traditional Unionist Voice party leader Jim Allister QC said: “As the politician who met with Barra McGrory QC and urged him to bring in an external investigator in regard to the PPS handling of the Maíria Cahill cases, I welcome the publication of the Starmer report.”