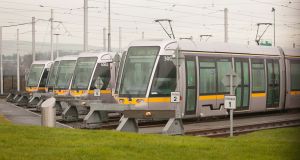 Luas operator Transdev has claimed that its tram drivers are taking the proverbial by seeking unprecedented levels of toilet breaks since the the start of the current industrial action over pay and conditions.

In a letter to the trade union Siptu, the company said that between last Wednesday, Saturday and Sunday tram drivers sought 60 “personal needs breaks”.

It said these breaks caused serious disruption to the travelling public.

It also said that if the practice did not stop it may take legal action and drivers who were found to be delaying services could be sacked.

In the letter, Transdev human resource manager David Horgan said that since the Luas system was introduced 12 years ago there had never been a day where that number of breaks was required.

“This action is clearly orchestrated to bring pressure on Transdev by Siptu and [the] effect of this action on the tram service and the travelling public is significant - delayed tram departures, tram regulation issues.

“More notably, it impacts on exact timing of the breaks of your members (as you are aware strict adherence to rostered break times constitutes parts of the actions of the work-to-rule notified to the company) and this can lead to tram services not running.”

Transdev said that the increase in the number of toilet breaks represented a direct escalation of industrial action.

The company argued that the breaks were designed to disrupt services and were not a legitimate form of industrial action.

“In the interim, in the event that the action continues to proceed, we will classify the action as unofficial industrial action and we may have no option but to remove personal needs breaks which impact on the tram service in their entirety and any employee who delays tram services will be liable to disciplinary action up to and including dismissal.”

The current industrial action by Luas staff over pay and conditions has seen services brought to a standstill for two 48-hour periods.

A work-to-rule has also been in place for a number of weeks.

Further strikes are scheduled to take place next month, including on St Patrick’s Day.

A new process at the Workplace Relations Commission aimed at resolving the row is due to commence on Tuesday.