Love and euros: Why Poles still carry a flame for Ireland

With Britain feeling like a hostile place, more Polish people are considering a move to Ireland 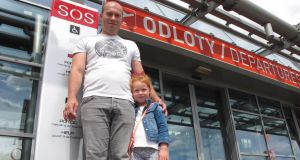 Dublin supermarket worker Marcin Raganowicz and his daughter Maya (5) at Modlin Airport in Warsaw. “I heard Britain is less friendly than Ireland, especially since the referendum,” he says. Photograph: Alex Duval Smith.

Polish workers are considering relocating to Ireland to escape perceived British hostility and the decline of sterling following the referendum on EU membership, according to a Cork-based charity for east Europeans.

Ireland’s economic growth, the stability of the euro and a classic Polish pop song from the 1990s – Kocham cie jak Irlandie (I love you like Ireland) – are cited as draws by some of the estimated 150,000 Poles already in the country.

“It is clear that Poles in the UK feel the security and safety are greater in Ireland,” says Wojciech Bialek, 40, who has answered more than a dozen emails and calls from Poles in Britain since the referendum. The social worker, who moved to Ireland in 2005, is the founder of the decade-old support group Together-Razem.

Bialek, who specialises in mental health and addiction issues, says the referendum and resulting mood in Britain have had a ripple effect.

“There are new anxieties in the community. In Britain, people are thinking of moving to Ireland or Scandinavia. I am even getting enquiries from Poles in Ireland who want Irish citizenship. Maybe they are afraid of a total breakdown of the EU.”

At Warsaw’s budget airport, Modlin, blue tailfins with yellow harps dwarf the trees. Aer Lingus and Ryanair’s 126 flights per week in both directions connect Dublin and Shannon to the capital. They also serve regional emigration hotspots, such as Rzeszów in southeastern Poland.

“I heard Britain is less friendly than Ireland, especially since the referendum. I made the right choice,” says Dublin-bound Marcin Raganowicz, 34, checking in with his five-year-old Irish-born daughter, Maya. “Poles in Britain are afraid they will be thrown out. People in Ireland are really friendly. You do not hear anyone complain about Poles. The only problem is the weather.”

Dublin-bound butcher Artur Sadowski, 43, says Poles and Irish people have “the same gentleness”. Married in Poland, he has been travelling between the two countries for six years. It is worth it for his €450 per week salary – more than double what he would be paid at home in Olsten.

Sadowski believes more and more Poles will opt for Ireland.

“There is a new economic boom in Ireland. Britain’s loss will be Ireland’s gain. My boss is now importing more meat for his money thanks to the fall of sterling. This means more jobs for Poles,” he says.

Studies of Polish migration intentions show that Britain has become a less-attractive destination since the Brexit debate began. The last six-monthly survey published in May by Polish employment agency Work Service found that Germany had overtaken Britain as a favourite potential destination among Poles planning to leave. Work Service press officer Andrzej Kubisiak says even though Ireland has a far smaller Polish population than Britain’s estimated 831,000, the country is in the top three of countries most-liked, with 34 per cent of Poles in Ireland saying they would like to remain there permanently.

Bialek personally blames U2 and Polish band Kobranocka. “Every Pole knows the song I Love You Like Ireland and the line, ‘for her tender whispers and white arms, I would give up my dull life’. There is no doubt that Ireland holds a special place in the Polish imagination and in Polish hearts,’’ he says.