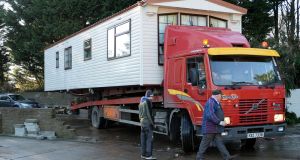 A mobile home is removed from the Travellers’ site at Woodland Park, Dundalk in January. Photograph: Eric Luke/The Irish Times Louth County Council has confirmed that it is to refurbish and reopen the unofficial halting site in Dundalk that Travellers were evicted from earlier this year.

The news was welcomed by Rebecca Quinn, spokeswoman for the Travellers who had lived at the Woodland Park site, and she said “it is a 360 degree u-turn.”

In a statement, the council said it has received “approval in principle” from the Department of the Environment for funding “to refurbish the existing halting site at Woodland Park in Dundalk”.

It added : “The department has expressed a concern that this will be the third refurbishment that will be funded by public monies since the site was first developed. In each case, the works were required due to vandalism.”

The site was closed as an official halting site in 2008 due to what the council says was a lack of interest among the local Traveller community.

It said the families were removed from it in January due to concerns “over site safety, including poor sanitation”.

It said that since then it has carried out safety works, costing €100,000 to remove 600 tonnes of domestic waste, address a rodent infestation and “all dangerous structures, apparatus and trees have also been removed.”

Ms Quinn said there will be 14 bays in the refurbished Woodland Park and as there are 23 families affected, the “big question” is which families would be allowed to move back in.