Postcard sent from Berkeley only arrived on Tuesday 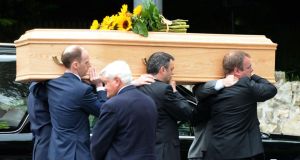 On the front was a picture of the Bubba Gump Shrimp Co, where 21-year-old Lorcán Miller worked.

Inside, he had drawn a doodle of himself serving food in his cap, t-shirt, jeans and special non-stick shoes.

And, then, a short message for his younger brothers and sisters, Jamie, Lucy and Poppy.

“Hi guys, just wanted to send you a postcard to show you where I’m working this summer. Bubba Gump's is a restaurant based on the film Forest Gump. You should watch it with mum and dad.

“All the food and drinks have really funny names based on the characters of the film. Best of all, there are lots of prawns (though Americans call them shrimp).

“As part of my job I have to talk to customers and I always tell them about my amazing brothers and sisters and how much I miss them.

“I hope you’re having lots of fun like me and being good. I’ll see you soon. Lots and lots and lots of love as always, Lorcán.”

He signed off with twelve kisses.

Lorcán’s father Ken shared the postcard with mourners at his son’s funeral service at Rathmichael Parish Church in Shankill, Co Dublin this morning.

The UCD medical student is the last of the Berkeley victims to be laid to rest today.

The card was a sign, his father said, of how much Lorcán adored his family, and loved spending time with them.

His father also remembered the small things which captured his personality.

Things like his “stupid hats, his giraffe onesie, his low-rider trike, the subtle signs posted on his bedroom door and his love of all things Harry Potter; his ability to take advice, make it his own, and excel; his pouting selfies; the miracle of him not getting repetitive thumb strain for using his mobile; and the cards he made for so many people.”

And, he said, to laughter from congregation, his smell.

“Not to forget the boy stench. His runners were not allowed to stay in our house. And we had a lovely, homely reminder when we visited his apartment in Berkeley... The girls admitting they never fully understood boy smells until they lived with the four of them.”

Hundreds of mourners crowded into the small church and surrounding grounds for a moving funeral service in which the young student’s friends sang and played songs he loved, such as Adele’s ‘To Make You Feel My Love’ and Coldplay’s ‘Fix You’.

The chief mourners included his parents Ken and Sinead, and three younger siblings, grandparents and godparents.

Members of Bray and UCD hockey clubs formed a guard of honour as Lorcán’s remains arrived into the grounds of the parish church. Many friends, classmates and teachers from his former school, St Andrew's - where he was deputy head of school - were also present.

Canon David Moynan, Rector of Kilternan, led the service in the presence of the Archbishop of Dublin, the Most Rev Dr Michael Jackson.

Canon Moynan told mourners they had gathered amid a continuing sense of shock and loss - for themselves and for the families of others who died so tragically in Berkeley, and those injured and their families.

In paying respect to Lorcán, he said mourners gave thanks for everything he was, and still is, to his family and friends.

“Most of all, we give thanks for the love he shared in his family - his parents and his brother and sisters, his grandparents, aunts and uncles, his cousins and amongst his friends”

Lorcán Miller’s remains are due to be interred in a private ceremony, later today.