Lockout: biased media on both sides 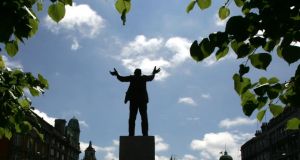 Newspaper coverage of the Lockout, its key players and events was deeply polarised, with many titles having vested interests in either side.

Individual publications derided both James Larkin and William Martin Murphy; cartoon sketches satirised their character and effects on a larger Irish public and sought to undermine their views.

Opinion-making was to the fore of each side’s efforts to outdo the other.

Padraig Yeates, author of Lockout: Dublin 1913, said that while the Murphy-owned Independent group was an obvious agitator on the side of the employers, the Freeman’s Journal, as well as socialist publications in the UK, rallied to the call of the common man.

He said “a definite demonisation of Larkin comes across in all the cartoons of the Evening Herald, the Independent and the Sunday Independent”.

Lack of sympathy
“If you lived outside the city you would have had no real concept of what was going on by reading the Irish Independent. It helps to explain why there was such a lack of sympathy among the readers.”

An early editorial in the paper said “there can be no truckling to anarchy”, and noted that those on the receiving end of Bloody Sunday’s baton charge were the “criminal off-scouring of the slums”.

For its part, The Irish Times appeared to have the “fairest” coverage of proceedings over the 4½-month duration, said Yeates, a former journalist with this newspaper.

However, he explained that a sectarian undercurrent existed during the Lockout and, while all but forgotten now, would not have been lost on the Protestant readership of The Irish Times.

The newspaper published WB Yeats’s poem September 1913 at the time, although this was thought to have had as much to do with Dublin Corporation’s refusal to facilitate a collection of paintings belonging to Hugh Lane.

Positive light
Murphy was presented in a positive light, however, in an Irish Times report on a meeting of the Dublin Chamber of Commerce, where “a resolution of thanks to him for his action in regard to the labour trouble was passed unanimously”.

The report went on to say that in the opinion of those there he had reacted to the dispute in a “prompt and energetic manner” and “had also acted in the best interests of the unfortunate men who had taken part in the strike”.

Sales of both the Sketch and Daily Mirror titles in the UK rose during the period. “The difference in the coverage in Ireland and Britain was significant, which explains why there was so much sympathy from the UK,” says Yeates.