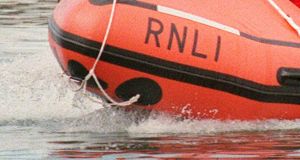 “Considerable seamanship skills were required in the transfer of the stretchered casualty as a consequence of the large draw at Sherkin pier,” said an RNLI spokeswoman: Photograph: Alan Betson

Baltimore lifeboat was called into action during the storm yesterday to assist with the medical evacuation of an elderly man injured in a fall on Sherkin Island off the west Cork coast.

The crew of the lifeboat, Alan Massey, put to sea in stormy conditions at 12.55pm after receiving the call for assistance when the man suffered a badly broken leg on Sherkin.

The lifeboat, under cox Kieran Cotter, made it safely across Baltimore harbour but heavy seas made the transfer of the casualty to the lifeboat at Sherkin very difficult.

“Considerable seamanship skills were required in the transfer of the stretchered casualty as a consequence of the large draw at Sherkin pier,” said an RNLI spokeswoman.

The man had received medical attention and was strapped to a stretcher to prevent the injured leg from moving during the transfer operation.

The lifeboat brought the man ashore at the new RNLI station at Bull Point in Baltimore where he was transferred by ambulance to hospital.