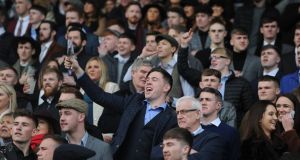 Near-record St Stephen’s Day temperatures brought a bumper crowd to Leopardstown for the start of this year’s Christmas festival.

Ostensibly mid-winter, the day felt like mid-spring, with a warm breeze and bright sunshine belying the time of year.

Many punters turned up without coats for the start of the St Stephen’s Day racecard. Given the racecourse’s exposed nature, this surely constitutes a first for the winter meetings.

It was overwhelmingly a young crowd, the men wearing the unofficial uniform of the casual Irish racegoer – the three-piece suit and the peak cap: Conor McGregor meets Peaky Blinders.

Minister for Culture, Heritage and the Gaeltacht Josepha Madigan, former taoiseach Brian Cowen and actor Stephen Rea were among the attendees.

The racecard got under way at 12.10pm, at which stage there was a sparse crowd in attendance, but the numbers started to build after 1pm, as did the queues outside. Hundreds of punters who turned up late were let in for free as a result of the long queues created by the unexpected level of demand.

The official attendance was 13,218, but this did not include all those who got in for free.

Leopardstown Racecourse chief executive Pat Keogh said tickets can be bought at a discount online, but too many cash customers turned up on the day.

“We just took a view that the queue was unacceptable and we let those people in for free,” he said.

“We accept we didn’t have enough cash turnstiles there to accommodate them. It was our mistake. We very much had an unprecented number today. A lot of people here are students.”

The feature race, the Racing Post Novice Chase, was won by the JP McManus-owned Le Richebourg. Mr McManus was conspicuous by his absence, but his son Kieran accepted the trophy on his behalf.

Daughter-in-law Anne Marie McManus and her three children wore festive red outfits for the day that was in it.

The presence of Ellie Mac in the six-horse race bore witness to the saying by the founder of the modern Olympic Games, Baron Pierre de Coubertin, that the most important thing in sport is not the winning, but the taking part.

The five-year-old mare was the story of the previous St Stephen’s Day meeting when she won the opening maiden hurdle of the festival at odds of 50-1.

The syndicate that owns her was set up in honour of Niccolai Schuster, a 21-year-old history and politics student in UCD, who was killed in the Berkeley balcony collapse in California in 2015.

Ellie Mac’s preparation for her first Grade One race was not helped by the dramatic fall of her jockey Bryan Cooper in the second race of the day.

He was on board the favourite Coeur Sublime and in a comfortable second place when the horse ploughed into the last fence, giving Cooper a nasty fall.

He was replaced by jockey David Mullins in the six-horse race, but it hardly mattered, as Ellie Mac made a bad start and never recovered. She trailed in last by a good distance.

The participation was all that mattered to the syndicate, who wore blue scarves in honour of Niccolai.

His father John said it had been a “tremendous day” for the whole family, with more than 50 family and friends turning up for the big race, including some from Japan and the US.

Among them was Niccolai’s uncle Bill Schuster, who lives in Japan. “It’s the spirit and having everybody together,” he said.