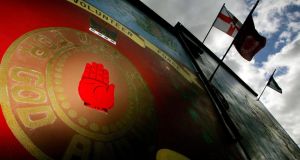 An Ulster Volunteer Force (UVF) mural on the Shankill Road in Belfast. Thousands have taken part in a commemoration in Co Antrim to mark the centenary of the Larne gun-running in 1914. Photograph: Jeff J Mitchell/Reuters.

Thousands have taken part in a commemoration in Co Antrim to mark the centenary of the Larne gun-running in 1914.

The UVF imported tonnes of guns and ammunition from Germany just four months before the outbreak of the first World War to arm the UVF which had vowed to fight Westminster plans for Irish home rule.

Estimates vary, but some 25,000 rifles and more than 3 million rounds of ammunition were landed on the night of April 24th and 25th 1914 at Larne and two ports in north Down, Bangor and Donaghadee

Supported by the Orange Order and other loyalist organisations, many of those who marked the commemoration on Saturday wore period costume and carried replica rifles.

Larne has hosted a series of commemorations this week to mark the event. A parade organised by Orange Order Larne District lodge number one, was held on Thursday – exactly 100 years after the SS Clyde Valley landed in the port.

Orangemen parades to the town’s Chaine Memorial Road, where a short service was held and poppy wreaths were laid.

On Tuesday, Junior Orangemen also marched through the town.