Kilbrin prepares for All-Ireland replay as demand for tickets surges 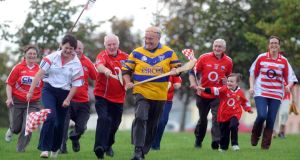 County Clare native Fr Kevin McNamara is a priest in Knocknagree, Co. Cork and is not shy about telling his local parishioners that he will be cheering for the banner county againt Cork in Saturday’s All Ireland hurling final replay. He is surrounded by Cork fans Mary O’Halloran, Joan Collins, Andy O’Halloran, Brendan Hickey, Mary O’Connor, Katelyn Fleming, Jimmy O’Sullivan and Christina Fleming. Picture: Eamonn Keogh

The beech trees that stand sentinel in the heart of Kilbrin village are turning an autumnal russet as September prepares to slip into October, but the red and white bunting on the houses shows some summer issues remain unresolved.

It’s the week before the All-Ireland hurling replay between Cork and Clare and here in a community of 900 people, sharing a parish with nearby Ballyclough, hurling fever is building again after the drawn game three weeks ago.

Situated to the east of Duhallow, Kilbrin’s main claim to fame in GAA circles hitherto has been that it was the birthplace of Thomas Croke, one time Archbishop of Cashel and Emly. It was that role together with his nationalist outlook that led the fledgling GAA to ask Dr Croke to become its patron.

But supporters in Kilbrin now have another link to Croke Park as they will cheer on one of their own, 23-year-old William Egan, when he lines out at wing-back for Cork on Saturday.

Honour
Kilbrin club chairman, Donal O’Mahony explains that Egan isn’t the first Kilbrin man to play senior hurling for Cork – that honour fell to Tom Field when he lined out at centre-back in 1968.“William is the first Kilbrin man to play in a senior All-Ireland final so obviously we’re very proud – for the drawn game I’d say there wasn’t a family in Kilbrin that didn’t have somebody up at the match cheering him on,” said O’Mahony.

So what are Cork’s and William Egan’s chances? One person well placed to answer is Kilbrin National School principal, Sean O’Gorman from Milford, who won an All-Ireland with Cork in 1990.

“Cork will have to improve hugely but I think they can do that and if they do, it would be a great old boost for Kilbrin to see William win an All-Ireland.”