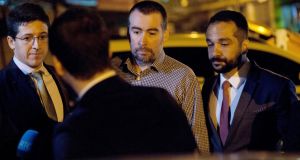 Ticket agent Kevin Mallon – who was arrested on the eve of the Olympic Games in Rio de Janeiro and one of 10 people charged last month in relation to ticket-touting allegations – has complained that the Brazilian courts are taking too long to give him back his passport.

His legal team has complained to a court in Rio de Janeiro about undue delays in processing his application – which, if granted, would mean that he could return to Ireland to await his trial, if it goes ahead.

The public prosecutor’s office in Rio de Janeiro has had the file since October 14th, awaiting the opinion of presiding prosecutor Marcus Kac.

Under the rules, it should have been returned to the court hearing the case within 15 days.

Complaining that the delay is hindering his ability to defend Mr Mallon, his lawyer Franklin Gomes said he had asked last week that Mr Mallow be allowed to travel home until his case is called, or for a minimum of 90 days.

Mr Gomes said that the judge was “very receptive” to his request, but is precluded from responding until such a time as the case file returns to that court from the public prosecutor’s office.

Without having access to case files, the Sao Paulo-based lawyer said it was impossible for them to complete their role in defending Mr Mallon, who works for a London-based hospitality ticket-seller.

Mr Gomes has lodged a further Habeas Corpus with the Rio de Janeiro Court of Justice, requesting either of the above options be considered – to allow Mr Mallon leave until his court date, or to leave for 90 days.

Mr Gomes said it was this same court (6th Court) that allowed Irish man Raymond Whelan to leave Brazil, after his arrest during the World Cup in 2014.

He expects a response within the next ten days.

According to Mr Gomes, Mr Mallon should not be treated any differently from a Brazilian citizen, by virtue of being a foreigner.

“Brazilian citizens have the right to await trial where they live. In the case of Kevin, this is not being allowed. He is apart from his family for an extended period, and is away from his work also. He is basically imprisoned here in Brazil.”

Mr Mallon is well, according to his lawyer, “but the proximity of Christmas is an emotional time for him. He misses his family very much, especially at this time of year.”

But, he added, “Kevin is very strong.”

Meanwhile, lawyers for Pat Hickey are also awaiting a response from the Special Court in Rio de Janeiro, regarding the release of the 71-year-old’s passport, and liberty to leave Brazil.

Last week, the prosecutor told Arthur Lavigne, senior counsel on Mr Hickey’s legal team, that he had not made a decision because of a heavy workload, but that he had promised to analyse the case this week.