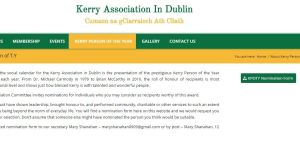 The association is also seeking nominations for its Laochra Chiarraí award

The Kerry Association in Dublin is seeking nominations for its annual Kerry Person of the Year award.

The association, which was formed in 1951, initiated the award in the 1970s and past winners include the literary figures, John B Keane, Brendan Kennelly and Con Houlihan and former Labour Party leader and tánaiste Dick Spring.

The nomination form is available on the association’s website www.kerryassociation.ie/about-kerry-person-of-t-y/.

The association is also seeking nominations for its Laochra Chiarraí award for exceptional community effort and the nomination form is available on www.kerryassociation.ie/laochra-chiarrai/.

The closing date in both cases is November 30th.

5 Covid restrictions could be needed until May unless numbers decrease, Nphet member says