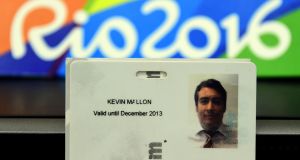 A picture of an ID card belonging to Kevin Mallon, an Irish director of THG Sports, who was arrested for allegedly illegally selling tickets for the Rio 2016 Olympic Games. A court in Brazil has denied a request to release Mr Mallon. Photograph: Tasso marcelo/AFP/Getty Images.

A federal appeals court judge in Brazil has rejected a request that an Irish man accused of ticket touting at the Olympic Games in Rio de Janeiro be released from prison.

His lawyers have argued that there is no evidence their client was selling tickets above face value and that his detention before a formal charge is made was excessive given ticket touting is a minor offence in Brazil which rarely results in a custodial sentence.

Mr Mallon’s lawyer was not immediately available for comment after the decision was announced on the court’s website. The site listed a new petition entered by him five minutes after habeas corpus was denied.

The Dublin finance director of British sports management company THG, Mr Mallon has been held in Rio’s Bangu prison since his detention on August 5th in an operation during which police also seized several hundred Olympic Council of Ireland (OCI) tickets for the Games.