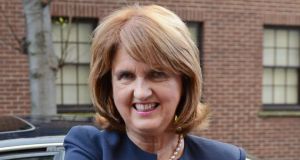 Tánaiste Joan Burton said today she believed Irish Water had been set up too quickly and needed several years before it could operate properly. Photograph: The Irish Times

Tánaiste Joan Burton has indicated the new water charging regime to be announced this week will in place for a minimum of three years.

In advance of the announcement of the scheme on Wednesday the Labour leader said she was confident water charges would be capped “for a very significant period of time”.

The Government is close to finalising a much simplified system of water charges which will mean an effective annual charge of less than €200 per household containing two or more adults.

The Coalition parties are hoping the package with significantly reduced charges will be enough to encourage a majority of households in the State to register with Irish Water and end the ongoing crisis.

She said that as a former accountant, she believed Irish Water had been set up too quickly and needed several years before it could operate properly.

“This is all potentially great stuff for everybody, but you can’t do it within this timeframe. It really has to be rolled out,” she told the Marian Finucane Show on RTÉ radio this morning.

The revised plan will see the discarding of multiple tiers of charges based on the number of adults in a household.

It will also replace three separate water allowances with a single universal allowance.

Under the scheme, every household which registers with Irish Water and gives details to the Department of Social Protection will be entitled to an annual allowance of some €100.

The single allowance will be available to all households irrespective of means.

It will replace the tax concession included in the budget, and other allowances announced as part of the social welfare package.