ISPCA seeing more animal cruelty ‘than ever before’ 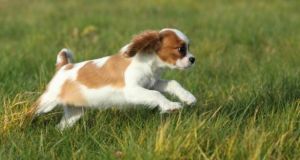 ‘We’re seeing more cruelty (to animals) than ever before and some instances that are more serious than anything we’ve come across,’ said ISPCA chief inspector Conor Dowling. Photograph: Getty Images

Minister for Agriculture Simon Coveney has said more prosecutions should be taken in animal welfare cases as figures show an increase in instances of cruelty.

The Irish Society for the Prevention of Cruelty to Animals (ISPCA) said it received more than 3,000 reports of cruelty to its helpline in 2015, with its inspectors taking in more than 1,100 animals.

“We’ve expanded our inspectorate from five members to eight but we need to because the volume of work is there. We’re seeing more cruelty than ever before and some instances that are more serious than anything we’ve come across,” he said.

Mr Dowling said ISPCA inspectors seized or took in 818 dogs in 2015, up about by about 300 on previous years. He said the dogs in these cases had been subjected to cruel treatment and were not simply unwanted pets.

The organisation also seized 82 cats and 74 equines. Inspectors initiated 35 prosecutions under the Animal Health and Welfare Act, nine of which were finalised in court.

Mr Dowling said there have been a number of cases of people keeping too many dogs to be able to care for them properly. He also said illegal puppy farms continue to be a problem.

In one instance in Co Carlow, a puppy farm was found to have 341 dogs and 11 horses on site.

Mr Coveney said it must be made clear that people who are unable, or refuse, to take care of animals “need to be banned from animal ownership. Full stop”.

He said animals often suffer during economic recessions as household cutbacks and domestic stress take their toll. “I think the last five years has been a period of some strain,” he said.

The Minister, who was speaking at the launch of the ISPCA’s strategic framework 2016 - 2020 document in Dublin, said: “I think you can judge the decency of a society by the way they treat their animals.”

He said the Animal Health and Welfare Act provided the authorities with greater power to tackle animal cruelty.

“The enforcement around animal welfare has real teeth now,” he said. He said more prosecutions were needed and people who treated animals poorly needed to be made an example of.