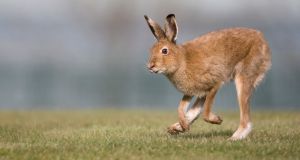 An animal welfare charity and a Government agency have signed an agreement to tackle what they said was the ‘growing problem’ of wildlife crime. Photograph: Andrew Kelly

An animal welfare charity and a Government agency have signed an agreement to tackle what they said was the “growing problem” of illegal hare-coursing, badger-baiting and other wildlife crime.

The Irish Society for the Prevention of Cruelty to Animals (ISPCA) and the Department of Heritage’s National Parks and Wildlife Service (NPWS) have signed a memorandum of understanding to work together wherever wildlife offences and animal welfare offences overlap.

As it stands, NPWS officers enforce wildlife legislation (such as the Wildlife Act 1976), while ISPCA inspectors are authorised animal welfare officers under the Animal Health and Welfare Act 2013.

This gives the ISPCA statutory powers to enter land to seize animals and other evidence if an offence has been committed.

Hare-coursing is usually regulated and exempted from the Animal Health and Welfare Act 2013. Despite this, there is a growing problem of illegal hare-coursing.

“[The memorandum] means that, as well as offences under the Wildlife Act, offences relating to cruelty to the dogs and the hares can also be investigated and will result in a greater number of charges and potentially higher penalties,” the organisations said on Wednesday.

A fine of up to €5,000 and/or imprisonment for up to six months can be imposed if a person is found guilty under the Wildlife Acts.

Fines of up to €250,000 and/or a prison sentence of up to five years may be imposed if a person is found guilty under the Animal Health and Welfare Act.

“This is a real opportunity to work closely with the NPWS and An Garda Síochána to tackle the scourge of wildlife crime, particularly when there is animal cruelty involved, as in illegal hare-coursing and badger-baiting, whether it relates to the dogs or the wild animals,” he said.

“We hope to see those convicted of causing unnecessary suffering to dogs or wild animals being banned from keeping animals for life.”

Trevor Donnelly, principal officer with responsibility for NPWS regional operations, said: “The National Parks and Wildlife Service welcomes this [memorandum of understanding], which provides for closer co-operation between the organisations with a view to tackling wildlife crime wherever it occurs.”

Anyone with concerns about the welfare of any animal can report them to the ISPCA in confidence via the organisation’s national animal cruelty helpline on 1890-515515 or online at www.ispca.ie/cruelty_complaint