Islanders among the first to vote on marriage equality 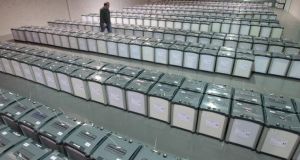 Turnout on the coast was low and slow up until tea time, with some estimates as low as 20 per cent, but a late flurry of activity pushed it over 50 per cent in several stations. Photograph: Mark Stedman/Photocall Ireland

Same sex marriage referendum votes have been cast on 12 offshore islands extending from Donegal to Galway on the Atlantic coast.

Some 2,100 registered voters on the Donegal, Mayo and Galway islands were obliged to cast their ballots a day in advance, while seven west Cork islands vote with the rest of the State.

Drizzle and mist affected activity at many polling stations, as did the fact that students were in exams or already working off the islands, while flights to the three Aran islands off Galway were disrupted by weather.

Turnout on the coast was low and slow up until tea time, with some estimates as low as 20 per cent, but a late flurry of activity after evening ferries pushed it over 50 per cent in several stations.

At tea-time, Galway county registrar and returning officer Marian Chambers-Higgins recorded 20 per cent turnout on Inis Meáín, with 25 per cent on Inis Oírr and Inis Mór

However, Inis Oírr presiding officer Padraic Ó Conghaíle estimated it could reach 50 per cent by closing time at 10pm.

“There was one voter ever hour for the first hours, and we opened at 7am,”presiding officer Augustine Coyne noted.

Canvassing in the marriage equality referendum didn’t extend to many of the communities - but islands tend to get forgotten about in referenda, several presiding officers noted.

“And there’s a wider Government indifference to us out here,”one of the officers observed.

Inishbofin manager Simon Murray said it was the “best referendum ever, with not a poster to be seen”.

“It’s great that people can be left alone to decide for themselves for once,” he said.

On Inishturk, Co Mayo, presiding officer Bernard Heaney ticked off about 36 per cent of registered voters by 5.30pm. Mayo’s returning officer Fintan Murphy recorded an average 35 per cent turnout across the three islands in his constituency. However, it had risen to 55 per cent within 15 minutes of closing on Clare island, according to poll clerk Pádraic O’ Malley.

On Arranmore island off Donegal, resident Jerry Earley said that the two polling stations were “very quiet” throughout the day.

“We’ve had no one canvassing here either, and I’d estimate the turnout at less than 50 per cent,” he said.

On Gola, where many of the 24 registered voters are seasonal residents, a total of five cast their ballots in Jimmy Sweeney’s sittingroom.

Three of the five had travelled out on the boat on Thursday morning, to be greeted by Mr Sweeney’s turf fire - with a kettle on for the presiding officer and Garda.