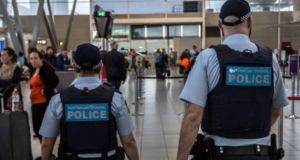 A 25-year-old Irish man is due to appear in court in Australia for allegedly causing a disturbance on a flight bound for Sydney from Los Angeles.

Australian Federal Police (AFP) officers said they responded to a request for assistance and arrested the man upon arrival at Sydney International Airport on October 2018.

He had allegedly approached the cockpit door during the flight, refused to obey cabin crew instructions to return to his seat, began behaving in a disruptive manner and assaulted one of the flight attendants.

The cabin crew then initiated their flight security procedures and the man was restrained for the remainder of the flight.

“The safe travel of passengers through our airports is a key priority for the AFP,” she said.

“This alleged behaviour has no place in our aviation system and, while there was no significant delay or personal harm caused on this occasion, it should still serve as a warning to others; if you risk the safety of your fellow passengers, you risk facing significant penalties.”

The man - who lives in Australia on a temporary working visa - is due to appear at Downing Centre Local Court on three charges of assault, committing an act of violence and behaving in an offensive and disorderly manner on an aircraft.