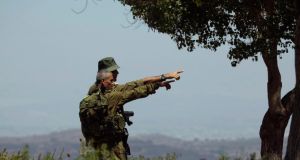 Israeli soldiers observe the Syrian side of the Quneitra border crossing between the Israeli-controlled Golan Heights and Syria yesterday. Photograph: Reuters

Irish troops evacuated 35 UN peacekeepers from a Syrian camp this morning as al Qaeda-linked Syrian rebels surrounded a number of encampments in the Golan Heights.

The Irish UN peacekeeper battalion, which is tasked with emergency responses, evacuated all the Filipino UN peacekeepers from the Breiqa encampment, according to a military official quoted by the PA news agency which said the camp had been surrounded by rebels of the Nusra Front.

Officials said the 35 Filipino UN peacekeepers were extracted this morning, with the assistance of Irish peacekeepers who rushed to the scene.

The official said there had been no shooting and no injuries. He said that the Irish battalion also evacuated another base on Friday but provided no further details.

A spokesperson for the Irish Defence Forces said the Irish 44th infantry group remained on “high alert” in the Golan Heights area of Syria but added that, due to operational reasons , the Defence Forces cannot comment on ongoing operations.

In a separate encampment, the Rwihana base, a gun battle began early today as 40 Filipino peacekeepers were surrounded by Nusra fighters who were ordering them to surrender, according to Rami Abdurrahman of the Britain-based Syrian Observatory for Human Rights.

Mr Abdurrahman, whose information comes from a network of activists throughout Syria, said he was not aware of any fatalities among the 40 Filipino peacekeepers in the Rwihana encampment as sporadic fighting continued throughout the day.

The clashes came after Syrian rebel groups, including the Nusra Front, overran the Quneitra crossing - located on the frontier between Syrian and Israeli controlled parts of the Golan Heights - on Wednesday, seizing 44 Fijian peacekeepers.

It was not immediately clear which rebel group was holding the Fijian UN peacekeepers, although it was likely to be the Nusra Front, said Syrian activist Abdurrahman.

The Nusra Front has recently seized hostages to exchange for prisoners detained in Syria and Lebanon.

The situation of the peacekeepers, tasked with monitoring a 1974 disengagement accord between Syria and Israel, remains “very, very fluid”, the UN secretary-general’s spokesman, Stephane Dujarric, told reporters yesterday at the UN headquarters in New York.

The UN said in a statement that it had received assurances from credible sources that the Fijian peacekeepers “are safe and in good health”.

UN secretary-general Ban Ki-moon has condemned the detention of the Fijians and called for their immediate release.

The UN mission, known as UNDOF, has 1,223 troops from six countries: Fiji, India, Ireland, Nepal, Netherlands and the Philippines.