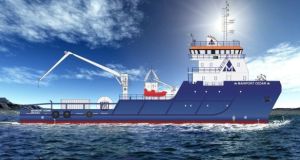 “Mainport Cedar”: The vessel, registered in the Marshall Islands, was built in Malaysia in 2013 for the Cork-based shipping company Mainport as a seismic support, tug and supply vessel.

An Irish-owned ship which was detained by Arab coalition forces on suspicion of arms smuggling in the Gulf of Aden has been released.

The 54m MV Mainport Cedar was carrying humanitarian supplies from Djibouti to Yemen for the World Food Programme (WFP) when it was apprehended almost a fortnight ago.

Ship owners, Mainport of Cork, confirmed that the ship with 13 crew on board was diverted to the Saudi Arabian port of Jizan on February 12th, where it was held until early this week.

A spokesman for Mainport said that the ship had now sailed and arrived into the Yemeni port of Hodeidah early on February 24th.

The two-year old ship has been on regular charter trips for the WFP since June of last year. It was carrying a cargo of tuna, medical supplies and telecommunications equipment to Yemen when it was escorted to Saudi Arabia for inspection.

The 13 crew- two Britons, seven Filipinos, two Nepalese, one Croatian and one Bulgarian, were able to remain on board,the spokesman said,and he described the diversion as a “formality” relating to paperwork for the telecommunications equipment.

Mainport said that the only arms on board were three fully licensed firearms kept in a locked secure cabinet for crew safety, and denied local media claims that the ship had been in Iran.

The Saudi-led Arab coalition initiated a military offensive in Yemen last year to prevent the Houthis, said to have backing from Iran, from taking full control after they secured much of the north of the country.

Yemen relies heavily on imports, and the current conflict has exacerbated its “fragile” food security which is deteriorating rapidly, according to the programme.

Some ten of Yemen’s 22 governorates are at “emergency” level, with an estimated 14 million people living in conditions just one step below famine, and some 7.6 million people in desperate need of food assistance.

The WFP says that the poor and most vulnerable have been hit by the conflict, with a severe spike in food prices since traders were unable to import enough food and distribute it safely.