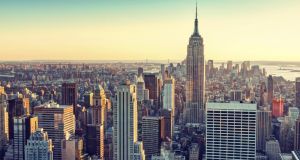 An Irish man was killed in an incident on a construction site in NewYork on Friday. Photograph: Thinkstock/Getty Images.

Tributes have been paid to an Irish man who was killed in an incident on a construction site in New York on Friday.

Trevor Loftus (40), originally from Pallaskenry, Co Limerick, was moving building materials at a site in Midtown in Manhattan with a truck-mounted device called a knuckle boom when its hydraulic system failed, officials said.

“He went to check on it, and he basically got crushed,” a New York police spokeswoman said.

The episode, which is under investigation, occurred at around 11.45am.

Mr Loftus was pronounced dead at the scene.

People in West Limerick paid tribute to Mr Loftus as a hard worker who was dedicated to his wife Fiona and their two young daughters, one of who is due to make her Holy Communion next month.

Mr Loftus, the oldest of four brothers, grew up in Pallaskenry where his mother still lives.

He recently bought a house near the village of Croagh and had purchased Neville’s pub and restaurant in Kilfinny which he was in the process of refurbishing.

Mr Loftus travelled between his native Limerick and New York from where he operated construction business Kenry Contracting Inc.

It is understood that he travelled to America on Thursday, a day before the fatal accident occurred.

DJ Daly, president of Pallaskenry GAA, a club for which Mr Loftus played hurling and football in his younger days, said he was a self-made man who was well known in the area.

“He went to New York with nothing and worked his way up. He was a very hard working young fella,” Mr Daly said.

“He was very well got locally. All the lads who went over to America he looked after them. He’s a big loss.”

“It’s had a devastating impact. It’s an awful shock for people, not just in Pallaskenry but Croagh and the whole area of west Limerick”.

The Department of Foreign Affairs said it was aware of the incident but had not been contacted regarding the provision of consular assistance at this point.

Eddie Jorge, an organiser for the New York state Ironworkers District Council, who was at the scene after the incident occurred, said incidents involving knuckle booms were fairly rare.

An employee who answered the phone at the company that owns the truck, Kerry Contracting Inc of Yonkers, said the company had no comment.

Records from New York’s Buildings Department say a 35-story hotel is being built on the site where the incident occurred.

A woman who answered the phone at another company connected to the project, Flintlock Construction Services LLC, said it was “a tragic accident,” but otherwise had no comment.