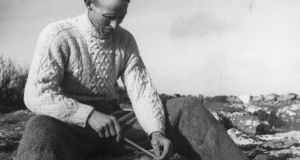 Purist Irish-language practitioners who frown on phrases such as “mo bhicycle” and “mo mhobile fón” are a “pain in the neck”, according to a Californian linguist, whose study of dialectical differences on the Aran Islands is due to be published today.

Dr Séamus Ó Direáin (77), whose grandparents emigrated from Inis Mór to Boston more than a century ago, believes rumours of the death of the Irish language are “greatly exaggerated” .

However, he warns that people must be “allowed to play with the language” if it is to survive.

That “playing” includes allowing people to choose their own dialect – as happened with the southernmost island of Inis Oírr, which opted to speak Munster Irish, despite its neighbours Inis Mór and Inis Meáin opting for the Connacht version.

His 1,000-page study gives many examples of this across the Aran archipelago.

Islanders change their pronunciation of the word “cailleadh” to denote the difference between someone having died and something having been lost.

Inis Oírr’s more frequent contact with Co Clare by sea, from Fanore to Doolin to Lahinch, would have been the main reason for the dominant Munster influence.

This variation has the potential to continue, as Inis Oírr has a short ferry crossing from Doolin, while the Ros a’ Mhíl fast ferry from Co Galway serves all three islands.

Dr Ó Direáin’s microscopic mapping of those linguistic differences over a 25-year period is believed to be the most comprehensive study of its type in the world, according to its project manager, Dr Deirdre Ní Chonghaíle.

Dr Ó Direáin first started learning Irish in the 1970s in Kenya, where he was researching African languages.

“A Ballyhaunis man I knew in Kenya was shocked that I was a Dirrane from Aran and couldn’t speak a word,” Dr Ó Direáin said.

The linguistic differences between the three islands, separated by a narrow stretch of water at the mouth of Galway Bay, had been the focus of previous studies - but there were “many blanks”, Dr Ó Direáin said.

“People on Inis Mór knew the difference between talk on the east end and the west end of the island, but I found out that it was far more complex, with differences between neighbourhoods comprising two or three townlands.”

The perceived wisdom that language only changes with young people was also challenged in his survey, which found that the older generation of speakers could be just as adventurous.

He said he believed the contribution of Raidió na Gaeltachta and TG4 had helped the language greatly, allowing it to develop and grow.

“There are a lot of dying languages in the world which would love to be in the position of modern Irish,” he said, noting that the wealth of literature and song in the language contributed to that.

However, it still needs its “umbilical cord” of funding for libraries and education.

“Libraries and schools ensure the bad stuff gets weeded out, in every language,” he said.

“Otherwise, everyone in Missouri would still be speaking like Mark Twain’s Huckleberry Finn.”

The study by Dr Ó Direáin is due to go online on NUI Galway’s website today.

1 Coronavirus: What happens when the lockdown ends in March?